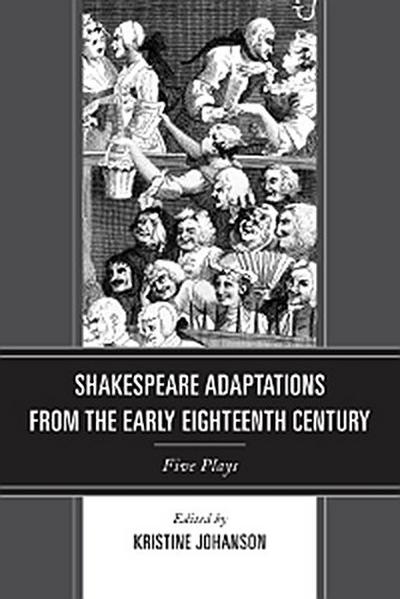 This book provides, for the first time, a scholarly edition of five adaptations of Shakespeare from the early eighteenth century. Providing a critical introduction and extensive explanatory notes, Shakespeare Adaptations from the Early Eighteenth Century firmly situates the texts of Coriolanus, Richard II, 2 Henry VI, 3 Henry VI, and Henry V in the literary, cultural, and political contexts of the period.
This book presents a scholarly edition of five of the first adaptations of Shakespeare from the eighteenth century, the period when Shakespeare became “Shakespeare.” Written by men influential in early Augustan cultural spheres, these adaptations demonstrate how contemporary literary principles and contemporary politics were applied to Shakespeare’s texts. In these adaptations of Henry V, Richard II, Coriolanus, 2 Henry VI and 3 Henry VI, we see the various ways that eighteenth-century authors “righted” Shakespeare’s “wrongs”: through the addition and alteration of female characters and romantic sub-plots, the introduction of new scenes, the use of the unities of time and place, and the inclusion of overt moral and political arguments.
The critical introduction contextualizes the five adaptations through its discussion of early eighteenth-century theatre and politics. First providing an overview of the state of the theatre at the beginning of the Augustan age, the introduction then examines the multiple political conspiracies that rocked the first years of George I’s reign and that provide the backdrop to these adaptations. Furthermore, the introduction draws particular attention to the importance of the actress in the early eighteenth century, highlighting how Shakespeare’s adaptors drew on actresses’ cultural capital to alter Shakespeare’s texts. Finally, the edition provides a critical introduction to each of the plays. Extensive explanatory notes are provided, which situate further these plays in their contemporary context. In its introduction and explanatory notes, Shakespeare Adaptations supplies an important critical apparatus to five plays which are often noted in the annals of Shakespearean theatrical history with derision. However, this edition reveals how these plays documented their own time and helped shape Shakespeare into the most recognizable literary icon in the Western canon.


Neoclassicism, Eighteenth-Century Drama, and the Making of Shakespeare


Dramatic Production and the Changing Space of the Theatres


The Little Theatre at Haymarket


The Political Context of the Theater: Crisis and Stability, 1714–1725


The Hanoverian Succession and the 1715 Jacobite Rising


Women in and of the Adaptations


Note on the Texts


The Invader of his Country, or The Fatal Resentment


The Tragedy of King Richard II


Henry V, or The Invasion of France by the English