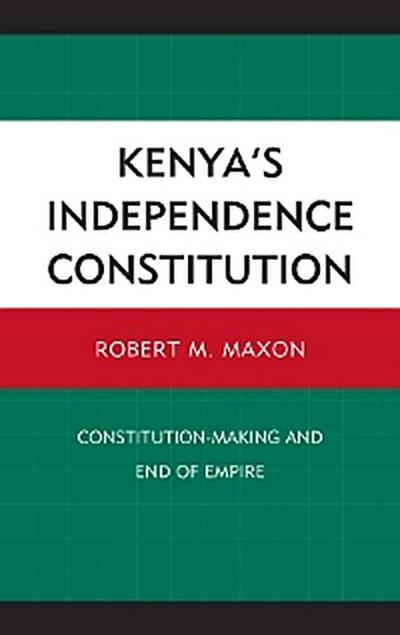 Kenya's Independence Constitution, by Robert M. Maxon, details the evolution of Kenya's constitution during the final stage of decolonization. Starting with the close of the first Lancaster House conference of 1960, Maxon illuminates the many influences that shaped Kenya's constitution-making. It concludes in 1963, coinciding with the end of empire, when political ethnicity dominated discourse. While the self-government constitution provided for majimbo, or federal constitution, the winning party in the 1963 elections changed the constitution such that federalism's life expectancy was brief.
Kenya's Independence Constitution: Constitution-Making and End of Empire, by Robert M. Maxon, is a narrative of the evolution of the constitution that was put into effect as Kenya's history as a colonial possession came to an end. It details the attempts of the colony's political elite and the British Colonial Office to find a constitutional means to move Kenya to the status of independent state. As this process moved forward, political ethnicity assumed central significance. This produced an environment in which demands for a federal constitution, popularly termed majimbo, came to dominate constitutional discourse. Deep disagreement among Kenya's political elite over this issue marked the remainder of the colonial period. That elite, now represented by the Kenya African National Union (KANU) and the Kenya African Democratic Union (KADU), advocated different constitutional paths to independence. KADU's demands for a majimbo constitution dominated discourse during 1962 and early 1963, but deep disagreement characterized the constitutional negotiations. This resulted in a constitution for self-government (introduced on June 1, 1963) that was regional in character but fell short of a federal system. Almost as soon as it came into existence, this constitution faced pressure for substantial change from KANU, the party that won the 1963 general election. As a result, the British government was forced to make alterations in what became the independence constitution. The latter proved a prelude to the destruction of majimbo a year later. Kenya's Independence Constitution provides the first in-depth description of the final stage of colonial Kenya's constitutional evolution. The book not only provides a detailed account of the process of constitution-making, including definitive treatments of the final two constitutional conferences of 1962 and 1963. Utilizing British and Kenya cabinet papers and secret intelligence reports never featured in earlier accounts, the narrative also destroys many of the myths that have long been associated with Kenya's decolonization, such as the alleged favoritism for federalism and support given by the colonial state and Colonial Office to KADU and the reasons for KANU's hostility to the self government constitution. It makes a particularly significant contribution by illuminating the genesis of KADU's majimbo policy and emphasizing the African agency involved. The book is most timely as the Kenya political elite struggles to find a new constitutional order to replace that which had its roots in the independence constitution.
Chapter 1 Preface
Chapter 2 Acknowledgments

Chapter 3 Chapter One: Background to Constitution-Making and Decolonization

Chapter 9 Chapter Seven: The 1963 Election and Setting a Date for Independence