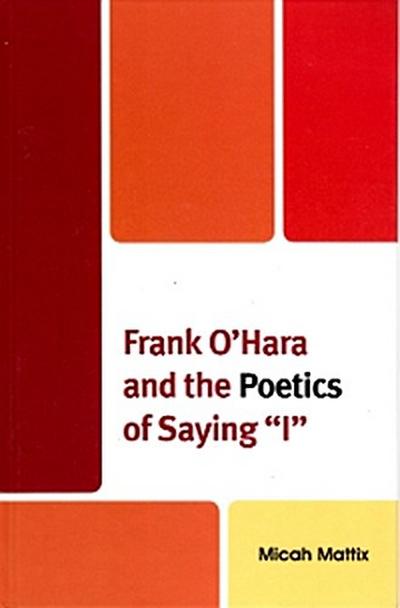 Frank O’Hara and the Poetics of Saying ’I’

Frank O'Hara and the Poetics of Saying 'I' examines the poetics of the American poet Frank O'Hara in the context of both European and American expressionism. Placing O'Hara in relation to poets such as Rilke, Williams and Pasternak, as well as painters such as Pollock and Motherwell, the book argues that while O'Hara understands poetic form to be the result of the poet's exploration of his experience, the purpose of the resultant artifact is not to enumerate the alphabet of the mind but to reinvigorate language through which experience of the material world is, in part, mediated.
While recent works of criticism on Frank O'Hara have focused on the technical similarities between his poetry and painting, or between his use of language and poststructuralism, Frank O'Hara and the Poetics of Saying 'I' argues that what is most significant in O'Hara's work is not such much his 'borrowing' from painters or his proto-Derridean use of language, but his preoccupation with self exploration and the temporal effects of his work as artifacts. Following Pasternak's understanding of artistic inspiration as an act of love for the material world, O'Hara explores moments of experience in an effort to both complicate and enrich our experience of the material world. On the one hand, in poems such as Second Avenue, for example, O'Hara works to 'muddy' language through which experience is, in part, mediated with the use of parataxis, allusions, and absurd metaphors and similes. On the other, in his 'I do this I do that' poems, he names the events of his lunch hour in an effort, among other things, to experience time as a moment of fullness rather than as a moment of loss. The book argues, furthermore, that O'Hara's view of the self as both an expression of the creative force at work in the world and as the temporal aggregate of finite experiences, places him between so-called 'Romantic' and 'postmodern' theories of the lyric. While it is often argued that O'Hara is a forerunner of a new, critically informed, 'materialist' poetics, this study concludes that O'Hara's work is somewhat less radical in its understanding of poetic meaning than is often claimed. Moreover, while O'Hara is preoccupied with his experience in his poems, the book argues that he espouses, in some respects, a rather traditional view of love. In addition to being a metaphor for the creative act, love, for O'Hara, is the chance coming together of two entities. Yet, one of the ironies of this is that while love is, for O'Hara, a feeling that is the result of movement, or the unexpected coming together of two otherwise separate entities, and is itself characterized in his work as a moving, 'life-giving vulgarity,' it produces a feeling of peace and stillness—a feeling that will not remain because of the fact that the self changes and that love is itself a moving, living thing. Thus, love contains within itself the ominous promise of future loss and is, therefore, the highest feeling that contains within itself the seeds of the lowest.
Chapter 1 Introduction: Frank O'Hara and His Critics; The Case of Marjorie Perloff
Chapter 2 Chapter 1: "Memorial Day 1950" and the Poetics of Saying "I"

Chapter 5 Chapter 4: The Self and "In Memory of My Feelings"