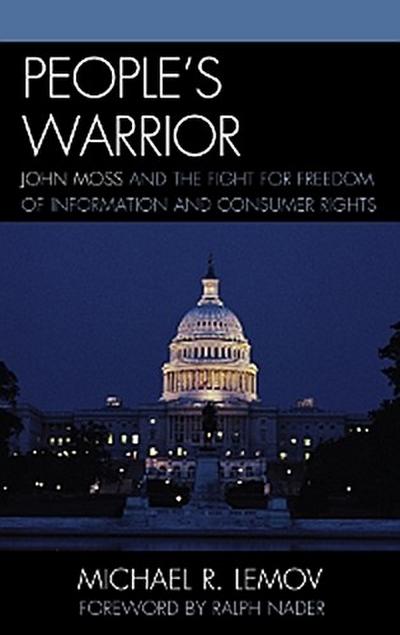 It is hard to believe today, that there was a time when there was no lawful right to obtain government information, children's toys and other consumer products were not subject to safety standards, motor vehicles were not designed to protect their occupants, and when there was no federal insurance to protect investor money in brokerage accounts. These and other consumer rights came only after fierce battles in the decade from 1966 to 1976. This book focuses on the enactment of these rights and on the unreported and unprecedented life and times of John Moss, one of the towering leaders of the decade. These guarantees, from the government its citizens, are embodied in the Freedom of Information Act, the Consumer Product Safety Act, the Federal Trade Commission Improvements Act, and the Securities Investor Protection Act, among other laws. They are the product of John Moss' tenacious, uphill struggle against overwhelming odds.
It is hard to believe that there was a time, not long ago, when there was no right to obtain government information, no protection against hazards in children's toys and other consumer products, no federal safety standards for motor vehicles, and no insurance to protect an investors' money and securities in brokerage accounts. These and other consumer rights were created only after fierce political battles in the decade between 1966 and 1976. People's Warrior is the untold story of that era and one of its towering leaders, Congressman John Moss. Based on previously undisclosed materials and interviews with key players of the time People's Warrior tells the story of a stormy decade in America, one in which key laws, such as the Freedom of Information Act and the Consumer Product Safety Act were enacted by Congress, despite overwhelming political opposition. It is also the improbable story of one man's life and determination. Moss fought for twelve years, against three presidents and at times his own party, for a freedom of information law that has stood the test of time and been copied around the world. Although at first stymied by special interests, he won sweeping consumer protection reforms. He went on to challenge Wall Street in an intense battle to enact major new investor protection laws. What happened to Moss and his progressive agenda in later decades, and what the future may bring for that agenda, make up the final part of this compelling story of a man and an era.
1 Acknowledgments
2 Foreword

4 1. Troubled Roots: A Little Town in the Valley

7 4. The People's Right to Know: A Distant Shore

8 5. The Freedom of Information Act: The Perilous Journey