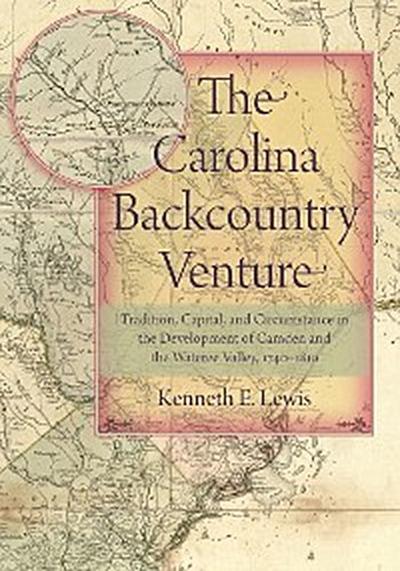 A study of the transformative economic and social processes that changed a backcountry Southern outpost into a vital crossroads
The Carolina Backcountry Venture is a historical, geographical, and archaeological investigation of the development of Camden, South Carolina, and the Wateree River Valley during the second half of the eighteenth century. The result of extensive field and archival work by author Kenneth E. Lewis, this publication examines the economic and social processes responsible for change as well as documenting the importance of those individuals who played significant roles in determining the success of colonization and the form it took.
Established to serve the frontier settlements, he store at Pine Tree Hill soon became an important crossroads in the economy of South Carolina’s central backcountry and a focus of trade that linked colonists with one another and the region’s native inhabitants. Renamed Camden in 1768, the town grew as the backcountry became enmeshed in the larger commercial economy. As pioneer merchants took advantage of improvements in agriculture and transportation and responded to larger global events such as the American Revolution, Camden evolved with the introduction of short staple cotton, which came to dominate its economy and slavery its society. Camden’s development as a small inland city made it an icon for progress and entrepreneurship.

Camden was the focus of expansion in the Wateree Valley, and its early residents were instrumental in creating the backcountry economy. In the absence of effective, larger economic and political institutions, Joseph Kershaw and his associates created a regional economy by forging networks that linked the immigrant population and incorporated the native Catawba people. Their efforts formed the structure of a colonial society and economy in the interior and facilitated the backcountry’s incorporation into the commercial Atlantic world. This transition laid the groundwork for the antebellum plantation economy.

Lewis references an array of primary and secondary sources as well as archaeological evidence from four decades of research in Camden and surrounding locations. The Carolina Backcountry Venture examines the broad processes involved in settling the area and explores the relationship between the region’s historical development and the andscape it created.