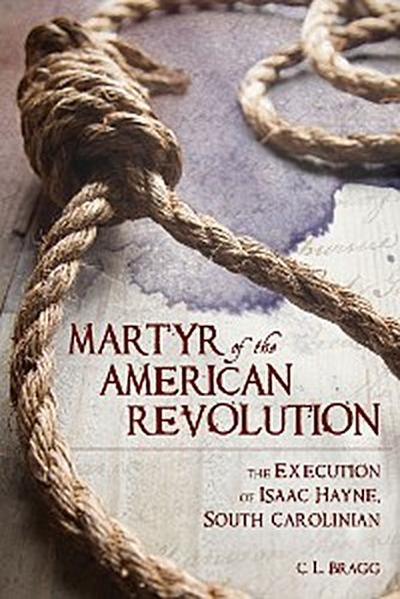 Martyr of the American Revolution

An examination of how a local incident ended in the execution of a prominent American by the British for treason.
In 1781 South Carolina patriot militiamen played an integral role in helping the Continental army reclaim their state from its British conquerors. Martyr of the American Revolution is the only book-length treatment that examines the events that set an American militia colonel on a disastrous collision course with two British officers, his execution in Charleston, and the repercussions that extended from the battle lines of South Carolina to the Continental Congress and across the Atlantic to the halls of British Parliament.
On August 4, 1781, in Charleston, South Carolina, the British army hanged Col. Isaac Hayne for treason. Rather than a strict chronological retelling of the events, which led to his execution during the British occupation of Charleston, what is offered instead is a consideration of factors, independently set in motion that culminated in the demise of a loving father and devout patriot.

Hayne was the most prominent American executed by the British for treason. He and his two principal antagonists, Lt. Col. Nisbet Balfour and Lt. Col. Francis Lord Rawdon, were unwittingly set on a collision course that climaxed in an act that sparked perhaps the most notable controversy of the war. Martyr of the American Revolution sheds light on why two professional soldiers were driven to commit a seemingly wrongheaded and arbitrary deed that halted prisoner exchange and nearly brought disastrous consequences to captive British officers.

The death of a patriot in the cause of liberty was not a unique occurrence, but the unusually well-documented events surrounding the execution of Hayne and the involvement of his friends and family makes his story compelling and poignant. Unlike young Capt. Nathan Hale, who suffered a similar fate in 1776, Hayne did not become a folk hero. What began as local incident, however, became an international affair that was debated in Parliament and the Continental Congress.