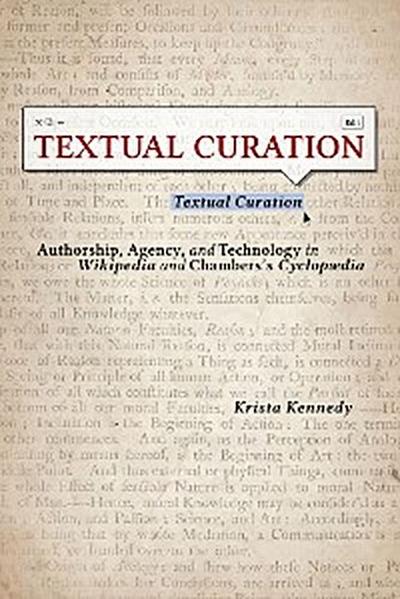 A study of the role community, financial support, texts, information structures, interfaces, and technology plays in collaborative works
Wikipedia is arguably the most famous collaboratively written text of our time, but few know that nearly three hundred years ago Ephraim Chambers proposed an encyclopedia written by a wide range of contributors—from illiterate craftspeople to titled gentry. Chambers wrote that incorporating information submitted by the public would considerably strengthen the second edition of his well-received Cyclopædia, which relied on previously published information. In Textual Curation, Krista Kennedy examines the editing and production histories of the Cyclopædia and Wikipedia, the ramifications of robot-written texts, and the issues of intellectual property theory and credit. Kennedy also documents the evolution of both encyclopedias as well as the participation of central players in discussions about the influence of technology and collaboration in early modern and contemporary culture.
Through this comparative study, based on extensive archival research and data-driven analysis, Kennedy illuminates the deeply situated nature of authorship, which is dependent on cultural approval and stable funding sources as much as it is on original genius and the ownership of intellectual property. Kennedy’s work significantly revises long-held notions of authorial agency and autonomy, establishing the continuity of new writing projects such as wikis with longstanding authorial practices that she calls textual curation.

This study examines a wide range of texts that recompose accepted knowledge into reliable, complex reference works requires contributions of article text alongside less commonly considered elements such as metadata vocabularies, cross-indexing, and the development of print and digital interfaces. Comparison of analog and networked texts also lays bare the impact of technological developments, both in the composing process and in the topics that can practically be included in such a text. By examining the human and technological curators that support these encyclopedias as well as the discourses that surround them, Kennedy develops textual curation as a longstanding theory and process that offers a nuanced construction of authorship.