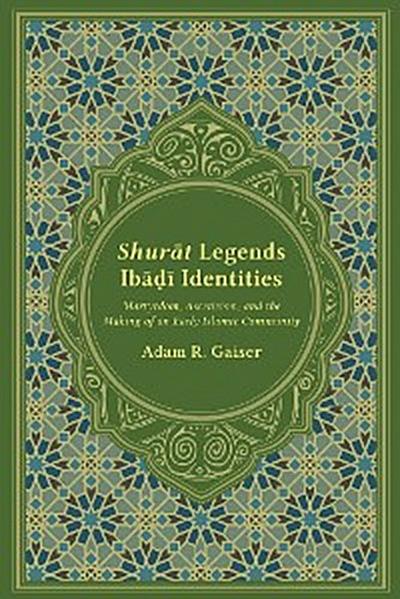 An analysis of a variety of early Islamic texts to understand the creation and identity of early martyres and ascetics
In Shurāt Legends, Ibāḍī Identities, Adam Gaiser explores the origins and early development of Islamic notions of martyrdom and of martyrdom literature. He examines the catalogs or lists of martyrs (martyrologies) of the early shurāt (Khārijites) in the context of late antiquity, showing that shurāt literature, as it can be reconstructed, shares continuity with the martyrologies of earlier Christians and other religious groups, especially in Iraq, and that this powerful literature was transmitted by seventh century shurāt through their successors, the Ibāḍiyya. Gaiser examines the sources of poems and narratives as quasi-historical accounts and their application in literary creations designed to meet particular communal needs, in particular, the need to establish and shape identity.
Gaiser shows how these accounts accumulated traits—such as all-night prayer vigils, stoic acceptance of death, and miracles-—of a wider ascetic and apocalyptic literature in the eighth century, including martyrdom narratives of Eastern Christianity. By establishing focal points of piety around which a communal identity could be fashioned, such accounts proved suitable for use in missionary activity in North Africa and the Arabian Peninsula. Gaiser also documents the reshaping of these narratives for more quietist purposes: emphasizing moderated rather than violent action, diplomacy, and respect for other Islamic sects as also being monotheistic, rather than condemning them as sinful.

Along with refashioning narratives, Gaiser details the Ibāḍī efforts to compile collections into genealogies, both biographical dictionaries and lineages of the true faith linking individuals and communities to local saints and martyrs. He also shows how this more nuanced history led to the formation of rules and authorities governing the shurāt. Employing rarely examined manuscript materials to shed light on such processes as identity formation and communal boundary maintenance, Gaiser traces the course by which this martyrdom literature and its potentially dangerous implications came to be institutionalized, contained, and controlled.