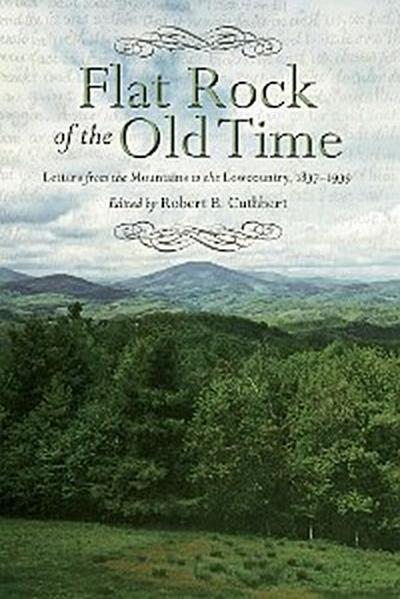 Flat Rock of the Old Time

A documentary history of a settlement adopted by lowcountry gentry escaping the heat of weather and war
The intoxicating “champagne air” of Flat Rock, North Carolina, captivated residents of lowcountry South Carolina in the nineteenth century because it offered them respite from the sickly, semitropical coastal climate. In Flat Rock of the Old Time, editor Robert B. Cuthbert has mined the collections of the South Carolina Historical Society to publish a documentary history of the place and its people. While many visitors came and went, others chose to become permanent residents. Among the Flat Rock settlers were some of the most distinguished South Carolina gentry: Blakes, Rutledges, Hugers, and Middletons.
They established the Episcopal parish church of St. John in the Wilderness Church, where many of them are buried. They also supported a local economy that helped provide livelihoods to native residents who supplied them with goods and services. Visiting each other daily, they swapped news and gossip, sharing their joys and burdens. Lowcountry families refugeed to Flat Rock during the Civil War, thereby escaping the devastation of the coast but not the revolutionary consequences of the war, such as emancipation, occupation, and economic collapse. And through it all they wrote letters. Some refugee-residents sent off missives every day, describing the delicious weather, the activities of their neighbors, and the entwining relationships of family, faith, business, and recreation that sustained Flat Rock.

The century chronicled in Flat Rock of the Old Times is viewed with a combination of nostalgia and clear-sightedness, not only by Cuthbert but also by his correspondents. Guided by the editor’s copious introduction, annotations, and textual apparatus, readers experience the conjunction of people and place that was Flat Rock.