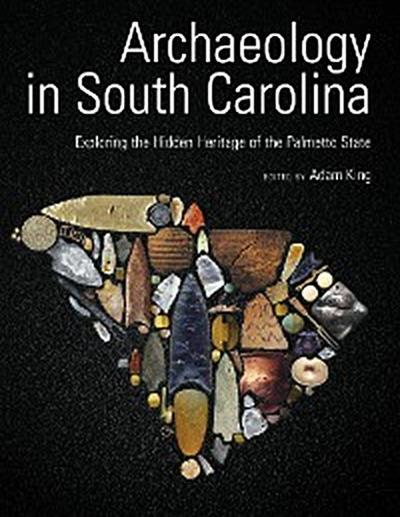 Scholars examine the rich human history of South Carolina from its earliest days to the present
Adam King’s Archaeology in South Carolina contains an overview of the fascinating archaeological research currently ongoing in the Palmetto state featuring essays by twenty scholars studying South Carolina’s past through archaeological research. The scholarly contributions are enhanced by more than one hundred black and white and thirty-eight color images of some of the most important and interesting sites and artifacts found in the state.
South Carolina has an extraordinarily rich history encompassing the first human habitation of North America to the lives of people at the dawn of the modern era. King begins the anthology with the basic hows and whys of archeology and introduces readers to the current issues influencing the field of research. The contributors are all recognized experts from universities, state agencies, and private consulting firms, reflecting the diversity of people and institutions that engage in archaeology.

The volume begins with investigations of some of the earliest Paleo-Indian and Native American cultures that thrived in South Carolina, including work at the Topper Site along the Savannah River. Other essays explore the creation of early communities at the Stallings Island site, the emergence of large and complex Native American polities before the coming of Europeans,the impact of the coming of European settlers on Native American groups along the Savannah River, and the archaeology of the Yamassee, apeople whose history is tightly bound to the emerging European society.

The focus then shifts to Euro-Americans with an examination of a long-term project seeking to understand George Galphin’s trading post established on the Savannah River in the eighteenth century. A discussion of Middleburg Plantation, one of the oldest plantation houses in the South Carolina lowcountry, is followed by a fascinating glimpse into how the city of Charleston and the lives of its inhabitants changed during the seventeenth and eighteenth centuries. Essays on underwater archaeological research cover several Civil War-era vessels located in Winyah Bay near Georgetown and Station Creek near Beaufort, as well as one of the most famous Civil War naval vessels—the H.L. Hunley.

The volume concludes with the recollections of a life spent in the field by South Carolina’s preeminent historical archaeologist Stanley South, now retired from the South Carolina Institute of Archaeology and Anthropology at the University of South Carolina.