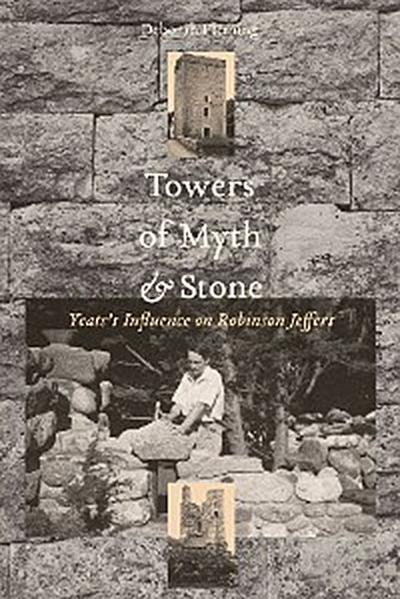 Towers of Myth and Stone

An examination of two men’s shared vision of modernity and appreciation for tradition expressed through their poetry
In this critical study of the influence of W. B. Yeats (1865–1939) on the poetry and drama of Robinson Jeffers (1887–1962), Deborah Fleming examines similarities in imagery, landscape, belief in eternal recurrence, use of myth, distrust of rationalism, and dedication to tradition. Although Yeats’s and Jeffers’s styles differed widely, Towers of Myth and Stone examines how the two men shared a vision of modernity, rejected contemporary values in favor of traditions (some of their own making), and created poetry that sought to change those values.
Jeffers’s well-known opposition to modernist poetry forced him for decades to the margins of critical appraisal, where he was seen as an eccentric without aesthetic content. Yet both Yeats and Jeffers formulated social and poetic philosophies that continue to find relevance in critical and cultural theory. Engaging Yeats’s work enabled Jeffers to develop a related, though distinct, sense of what themes and subject matter were best suited for poetic endeavor. His connection to Yeats helps to explain the nature of Jeffers’s poetry even as it helps to clarify Yeats’s influence on those who followed him. Moreover, Fleming argues, Jeffers’s interest in Yeats suggests that critics misunderstand Jeffers if they take his rejection of modernism (as exemplified by Wallace Stevens, William Carlos Williams, and Ezra Pound) as a rejection of contemporary poetry or the process by which modern poetry came into being.