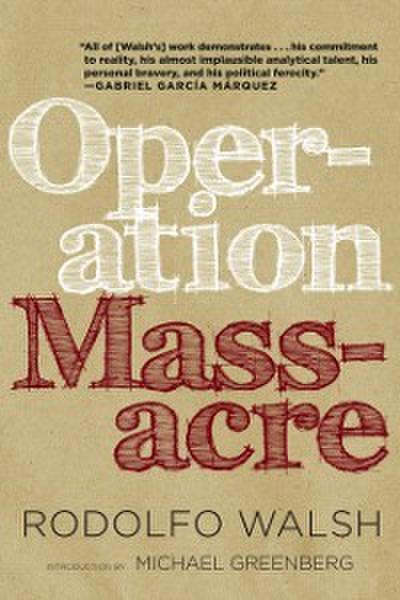 1956. Argentina has just lost its charismatic president Jun Peron in a military coup, and terror reigns across the land. June 1956: eighteen people are reported dead in a failed Peronist uprising. December 1956: sometime journalist, crime fiction writer, studiedly unpoliticized chess aficionado Rodolfo Walsh learns by chance that one of the executed civilians from a separate, secret execution in June, is alive. He hears that there may be more than one survivor and believes this unbelievable story on the spot. And right there, the monumental classicOperation Massacreis born.Walsh made it his mission to find not only the survivors but widows, orphans, political refugees, fugitives, alleged informers, and anonymous heroes, in order to determine what happened that night, sending him on a journey that took over the rest of his life.Originally published in 1957,Operation Massacrethoroughly and breathlessly recounts the night of the execution and its fallout.From the Trade Paperback edition.