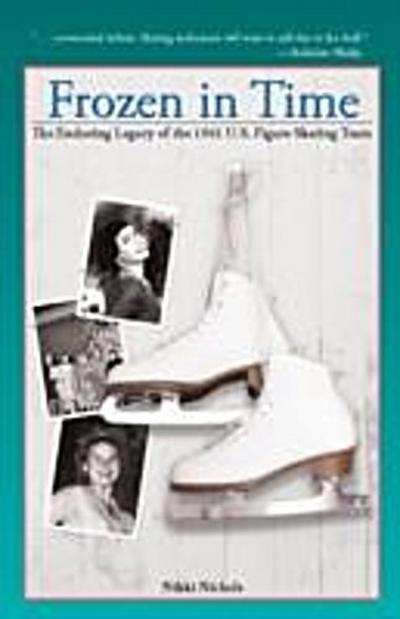 This meticulously researched book tells a deeply moving account of the events surrounding the plane crash that killed the 1961 US figure skating team.

Read the deeply moving and impeccably researched account of the events surrounding the plane crash that killed the 1961 US figure skating team.

Only once has the United States lost an entire national team to disaster: 1961, when all eighteen members of the US figure skating team died in the crash of Sabena Flight 548. Sixteen family members, coaches, and friends died with them. Frozen in Time takes you, for the first time ever, inside the lives of these skaters, revealing their friendships and romances, rivalries, sacrifices, and triumphs.

The skaters you’ll read about were the top finishers at the 1961 US National Championships. Winning a medal at Nationals earned each skater passage aboard Sabena Flight 548, a state-of-the-art Boeing 707. The plane would take them to Brussels, where they planned to board a new plane for Prague, host city of the 1961 World Figure Skating Championships. Some of the skaters brought parents or older siblings as chaperones. Coaches and judges also boarded the plane, and some of them brought spouses and children. When the plane crashed in a Belgian field on February 15, entire families were shattered, and the American skating program suffered a staggering blow that threatened to cripple it for many years.

Frozen in Time takes you on a journey to experience the highly competitive US National and North American championships of that fateful year. This story takes place in the final days of what now seems like an antique era, when the world was black and white, when figure skating was not a well-publicized sport. The book portrays strong, accomplished women leading unconventional lives on a national stage in a conservative era. The story of the Owen and Westerfeld women—along with all the dedicated athletes—transcends the world of sport and touches the human heart. It is one of the most powerful and tragic stories in the history of American sports.

“. . . a reverential tribute. Skating enthusiasts will want to add this to the shelf.”
—Publishers Weekly