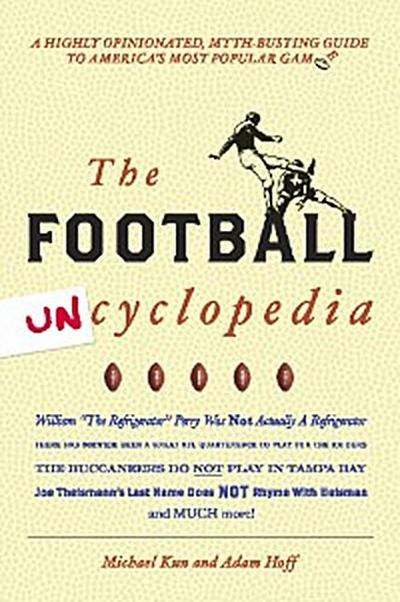 With a blend of statistical analysis, opinion, love for the game, and a healthy dash of humor, authors Michael Kun and Adam Hoff challenge the myths and beliefs that have long afflicted football. No subject is off limits. The greatness of the 1972 Miami Dolphins? Skewered. America's Team? Put in its place. Pittsburgh's Berkowitz Fish Sandwich? Praised, obviously. Joe Namath? Well, he gets a little bit of everything.
The Football Uncyclopedia gives equal time to owners and champions, stadiums and cities. It rushes to the defense of everyone from Shaun Alexander to Kurt Warner and of everything from the Heisman Trophy to Randall Cunningham's marble business. It focuses on player legacies, NFL history, and hot-button issues, but it also delves into topics like celebrity misbehavior, on-air kisses, and the film
Ace Ventura: Pet Detective.
The Football Uncyclopedia covers the names, the nuances, and everything in between that make football an enduring American phenomenon.