Frozen in Time: The Enduring Legacy of the 1961 U.S. Figure Skating Team 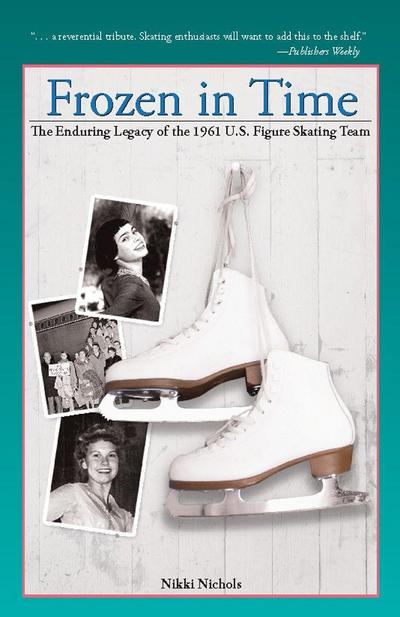 Nikki Nichols is a senior writer for International Figure Skating Magazine and also serves as a copyeditor for the magazine. She has written for Skating Magazine, Indianapolis Monthly, and numerous other trade publications and journals. Nikki had successful careers in television news and public relations before writing this, her ¿rst book. She skates competitively, having won a gold medal at the Indiana State Championships, a gold and silver at the 2004 Midwestern Adult Sectional, and a bronze medal at the 2007 US Adult Figure Skating Championships in the Interpretive event. She is a two-time ¿nalist in the adult silver ladies free skate at the US Adult Nationals. She also notched a ¿fth-place ¿nish in Adult Gold Pairs at the 2007 Adult Nationals, which she did with her pairs partner and husband, Michael Cunningham. The two had their ¿rst child, Thomas, in April of 2008. They reside just south of Indianapolis, Indiana.
On February 15, 1961, all 18 members of the U.S. World Figure Skating Team were killed in a plane crash, along with 16 coaches, officials, and family members. "Frozen in Time" takes readers inside the lives of the young skaters who died in the crash, revealing their friendships, romances, rivalries, sacrifices, and triumphs. The dramatic focus lingers on two families of powerful women: the Owens and the Westerfelds. Maribel Owen, the most famous woman in figure skating at the time, relentlessly drives her two young daughters--pairs champion Mara and the spectacular Laurence, who graced the cover of "Sports Illustrated" on the day she died. Myra Westerfeld, meanwhile, loses her marriage while guiding her daughters Sherri and Steffi to the pinnacle of the sport. Along with the bittersweet personal stories, author Nikki Nichols recounts the U.S. skating program's lengthy struggle to rebuild after this devastating accident.