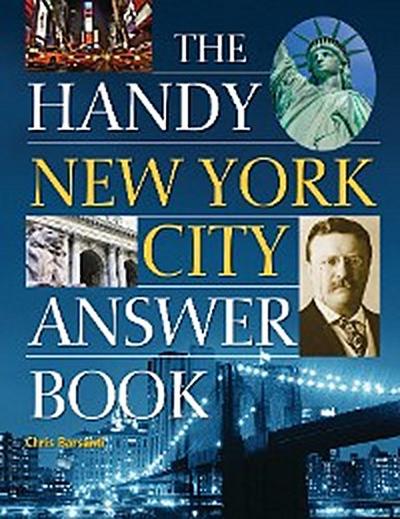 A primer on the history, culture, and people of New York City. Answers in plain English to more than 850 questions on the sports, cultural and business institutions, growth of the city, local economy, notable sons and daughters, neighborhoods, landmarks, places of interest, quirky and, fun facts, and colloquialisms.
The hustle. The bustle. The Big Apple, its people, history and culture!

New York is the largest city in the United States. This self-proclaimed capital of the world is known as a melting pot of immigrants, Ellis Island, the Statue of Liberty, the Empire State Building, Central Park, Wall Street, Broadway, bridges, bodegas, restaurants, and museums. The “city that never sleeps” is bustling with people, cultural and sporting events, world-class shopping and high fashion, and other tourist attractions that draw in millions visitors from all over the world. The Handy New York City Answer Book explores the fascinating history, people, myths, culture, and trivia, taking an in-depth look at the city so nice, they named it twice.

Learn about the original Indigenous peoples, early Dutch settlers, the importance of the port, the population growth through immigration, the consolidation of the boroughs, the building of the subway system and modern skyline, and much, much more. Tour landmarks from the Brooklyn Bridge to the Rockefeller Center to the Stonewall Inn, and Central Park to the 9/11 Memorial. Learn about famous sons and daughters, including Woody Allen, Jay-Z, J.D. Salinger, and Donald Trump. The government, parks, and cultural institutions are all packed into this comprehensive guide to New York City. Find answers to more than 850 questions, including: