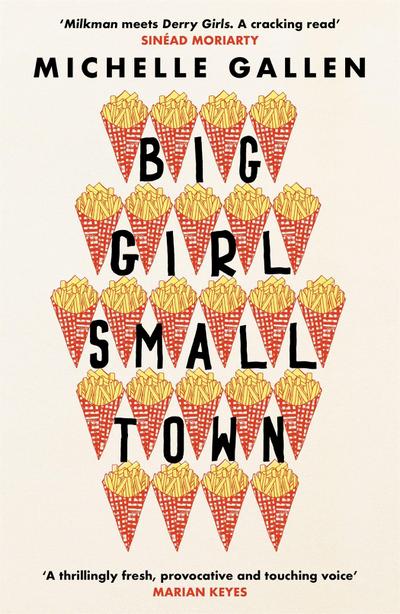 Gallen, MichelleMichelle Gallen was born in Tyrone in the 1970s and grew up during the Troubles a few miles from the border. She studied English Literature at Trinity College Dublin and Publishing at Stirling University. She has had work published in the Stinging Fly, Mslexia and others and won the Orange/NW Short Story Award. Big Girl, Small Town was shortlisted for the Costa First Novel Award, the Comedy Women in Print Prize and Newcomer of the Year at the Irish Book Awards.
SHORTLISTED FOR THE COSTA FIRST NOVEL AWARD

SHORTLISTED FOR THE IRISH BOOK AWARDS NEWCOMER OF THE YEAR

SHORTLISTED FOR THE COMEDY WOMEN IN PRINT PRIZE

LONGLISTED FOR THE ONDAATJE PRIZE

Routine makes Majella's world small but change is about to make it a whole lot bigger.

Other people find Majella odd. She keeps herself to herself, she doesn't like gossip and she isn't interested in knowing her neighbours' business. But suddenly everyone in the small town in Northern Ireland where she grew up wants to know all about hers.

Since her da disappeared during the Troubles, Majella has tried to live a quiet life with her alcoholic mother. She works in the local chip shop (Monday-Saturday, Sunday off), wears the same clothes every day (overalls, too small), has the same dinner each night (fish and chips, nuked in the microwave) and binge watches Dallas (the best show ever aired on TV) from the safety of her single bed. She has no friends and no boyfriend and Majella thinks things are better that way.

But Majella's safe and predictable existence is shattered when her grandmother dies and as much as she wants things to go back to normal, Majella comes to realise that maybe there is more to life. And it might just be that from tragedy comes Majella's one chance at escape.

'It's a smasher' Kathy Burke
The darkly-comic story of Majella, who is unapologetically and completely herself