The Summer of Us 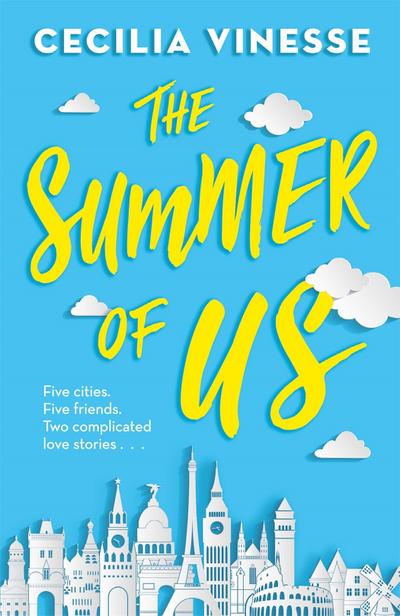 Cecilia Vinesse was born in France but grew up between Tokyo, Japan and Greenville, South Carolina. Her obsession with Nora Ephron movies led her to New York City to attend Barnard College and then to live in New York for three years afterward, working in children's book marketing and living in an apartment furnished mostly by stacks of novels.

Now she's in the UK where she splits her time holding late-night writing sessions, daydreaming in libraries, and having Buffy the Vampire Slayer marathons with her girlfriend Rachel and a pup named Malfi. She writes books about teenagers who wander around cities and fall in love and eat really delicious food.

Aubrey and Rae have been planning their European tour since the moment they met. It was meant to be the perfect way to spend their last summer together before university, but now it's not just the two of them . . .

There's Jonah, Aubrey's seemingly perfect boyfriend, and Gabe, who Aubrey may have accidentally kissed. Then there's Clara, the friend Rae is crushing on, hard, even though there's no hope because Clara is into guys, not girls. And on top of all that Aubrey and Rae's friendship appears to be falling apart. Things are more complicated at eighteen than they were at ten.

Set off on a romantic adventure that embraces warm summer nights, the thrill of first kisses and the bittersweet ache of saying goodbye to the past.