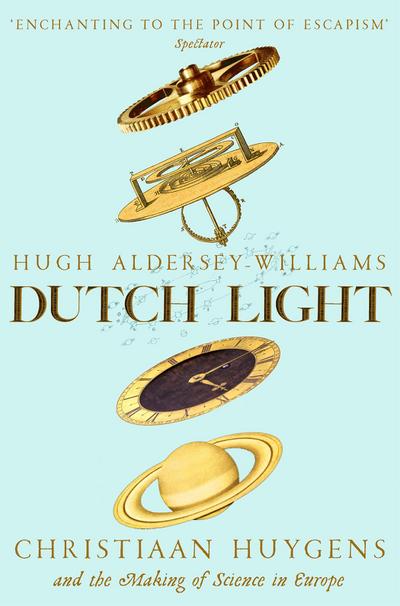 Aldersey-Williams, HughHugh Aldersey-Williams studied natural sciences at Cambridge. He is the author of Periodic Tales, Anatomies, Tide: The Science and Lore of the Greatest Force on Earth and Dutch Light.

'Enchanting to the point of escapism.' - Simon Ings, Spectator

'Hugh Aldersey-Williams rescues his subject from Newton's shadow, where he was been unjustly confined for over three hundred years.' - Literary Review

Filled with incident, discovery, and revelation, Dutch Light is a vivid account of Christiaan Huygens's remarkable life and career, but it is also nothing less than the story of the birth of modern science as we know it.

Europe's greatest scientist during the latter half of the seventeenth century, Christiaan Huygens was a true polymath. A towering figure in the fields of astronomy, optics, mechanics, and mathematics, many of his innovations in methodology, optics and timekeeping remain in use to this day. Among his many achievements, he developed the theory of light travelling as a wave, invented the mechanism for the pendulum clock, and discovered the rings of Saturn - via a telescope that he had also invented.

A man of fashion and culture, Christiaan came from a family of multi-talented individuals whose circle included not only leading figures of Dutch society, but also artists and philosophers such as Rembrandt, Locke and Descartes. The Huygens family and their contemporaries would become key actors in the Dutch Golden Age, a time of unprecedented intellectual expansion within the Netherlands. Set against a backdrop of worldwide religious and political turmoil, this febrile period was defined by danger, luxury and leisure, but also curiosity, purpose, and tremendous possibility.

Following in Huygens's footsteps as he navigates this era while shuttling opportunistically between countries and scientific disciplines, Hugh Aldersey-Williams builds a compelling case to reclaim Huygens from the margins of history and acknowledge him as one of our most important and influential scientific figures.

Hugh Aldersey-Williams transports us to the Dutch Golden Age - a time of immense scientific and artistic innovation - in this histo-biography of Christiaan Huygens, one of Europe's leading, yet unsung, thinkers.