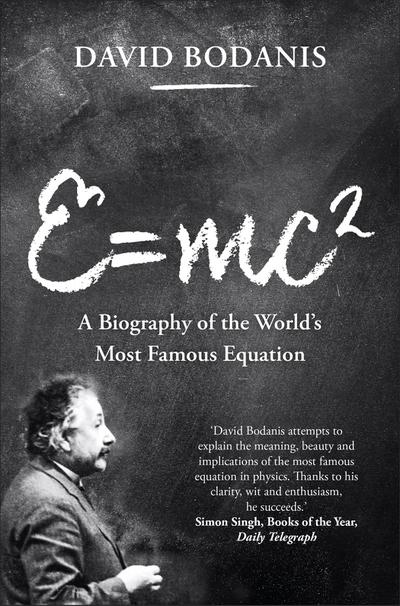 David Bodanis has had several careers. As an academic he lectured at the University of Oxford for many years, where he designed and taught the university's main survey of social studies, entitled 'An Intellectual Tool-Kit'. As an author he's written several best-sellers, on topics ranging from history to popular science; as a business consultant, he's worked with a number of leading firms in Europe and America.

Born in Chicago, he has lived in France and England most of his adult life. A single parent, he has two children, and lives in London.

By the end of the astonishing E=mc2, a dedicated reader will have achieved, if only by osmosis, an understanding of Einstein's theory of relativity and feel quite at ease dining with Nobel Prize winners. It's a lucid, even thrilling study: the very best kind of science journalism. I didn't know I could know so much.' Fay Weldon, Books of the Year, Washington Post

In 1905, Albert Einstein produced five historic papers that shattered many cherished scientific beliefs. One of those papers introduced the theory of special relativity and his legendary equation, E=mc2. Generations have grown up knowing that equation changed the shape of our world, but without understanding what it really means and why it is so significant.

In this fascinating biography David Bodanis tells the story of one of the greatest scientific discoveries in history. He looks at the elements 'e', 'm' and 'c'; and honours the scientists whose landmark discoveries paved the way for Einstein. He plots the course of the equation through the twentieth century, showing how our lives have been revolutionized by its applications; and looks far ahead to the future.

But as with any biography, it is the human stories that really ignite the subject - stories of love, courage and tragedy, of near misses, disappointments and disasters that, brought together by Bodanis in this remarkable book, turn Einstein's seemingly impenetrable theory into a dramatic and accessible human achievement.

'Both informative and highly readable...E=mc2 is a wonderful romp through Einstein's famous formula.. this is everything a popular science book should be' DAILY EXPRESS

'Bodanis himself seems like an intellectual thermonuclear explosion, a kind of Jonathan Miller on speed...This is an outstanding introduction to relativity by a gifted practitioner of popular science' INDEPENDENT

'With skill and plenty of colourful anecdotes Bodanis traces the intellectual ancestry of E=mc2...fast moving and entertaining' THE TIMES

'E=mc2 reveals, amongst other wonders, how many women physicists were involved in the story. Which makes this morally improving, as well as fascinating reading' George Walden, Books of the Year, SUNDAY TELEGRAPH

'The book fizzes in the readers imagination' TIMES EDUCATIONAL SUPPLEMENT