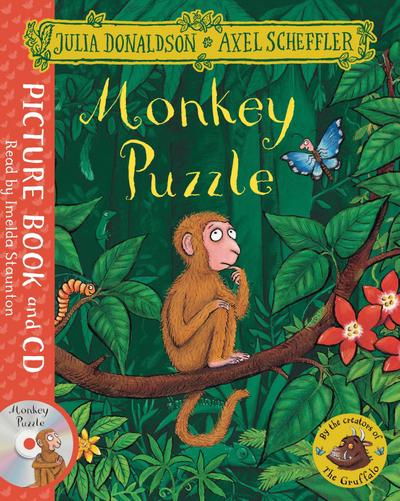 Donaldson, JuliaJulia Donaldson has written some of the world's best-loved children's books, including modern classics The Gruffalo and The Gruffalo's Child, which together have sold over 17 million copies worldwide, and the hugely successful What the Ladybird Heard adventures. Julia also writes fiction, including the Princess Mirror-Belle books illustrated by Lydia Monks, as well as poems, plays and songs - and her brilliant live shows are always in demand. She was the UK Children's Laureate 2011-13 and has been honoured with a CBE for Services to Literature. Julia and her husband Malcolm divide their time between West Sussex and Edinburgh.

Scheffler, Axel
Axel Scheffler is a star illustrator whose instantly recognizable, warm and witty illustrations have achieved worldwide acclaim and numerous awards. Axel is the illustrator of wonderful novelty, gift and poetry books for Macmillan, such as Fish Who Dream of Trees (Two Hoots) and the bestselling The Bedtime Bear, The Tickle Book and Mother Goose's Nursery Rhymes - and of course, he is the illustrator of some of the world's best-loved picture books, including modern classics The Gruffalo and The Gruffalo's Child, which together have sold over 17 million copies worldwide. Axel's artwork is exhibited internationally; he has illustrated for many charities and designed the Royal Mail Christmas stamps in 2012. Born in Hamburg, Axel now lives with his family in London.

Staunton, Imelda
Imelda Staunton is well know internationally for her many film roles, just some of which include Vera Drake, Shakespeare in Love , Sense and Sensibility and Nanny McPhee. Her television work includes Fingersmith, A Bit of Fry and Laurie, The Singing Detective and David Copperfield. She won the BAFTA for best actress for her role as Vera Drake and was also nominated for the best actress Oscar at the 77th Annual Academy Awards.

A special book and CD edition of the bestselling Monkey Puzzle.

Where is Monkey's mummy? It's not too much fun being lost in the jungle, and little monkey wants his mum. A kindly butterfly is keen to help, but they don't seem to be having much luck and keep finding the wrong animals! But eventually, they find . . . Dad! It's just as well that he knows exactly where mum is, and she's waiting with a well-deserved cuddle.

Monkey Puzzle is a clever, funny and charming tale from the unparalleled picture book partnership of Julia Donaldson and Axel Scheffler, creators of The Gruffalo. Monkey Puzzle Book and CD Pack features the classic story with a stunning redesigned cover and finish, and a story CD read aloud by actress Imelda Staunton, making it a must-have addition to the bookshelves of all Donaldson and Scheffler fans - big and small!

Also available with redesigned covers are The Gruffalo, The Gruffalo's Child, Room on the Broom, The Snail and the Whale, The Smartest Giant in Town, Charlie Cook's Favourite Book, and A Squash and a Squeeze.