The Gruffalo. Book and CD Pack 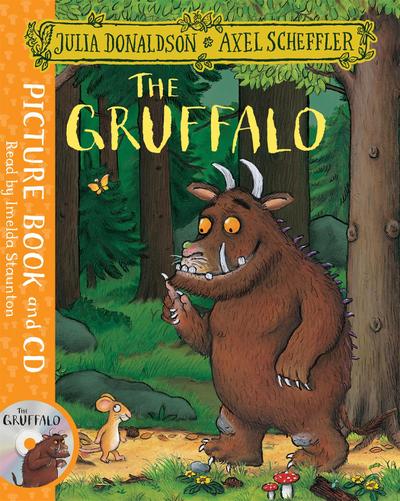 Staunton, ImeldaImelda Staunton is well know internationally for her many film roles, just some of which include Vera Drake, Shakespeare in Love , Sense and Sensibility and Nanny McPhee. Her television work includes Fingersmith, A Bit of Fry and Laurie, The Singing Detective and David Copperfield. She won the BAFTA for best actress for her role as Vera Drake and was also nominated for the best actress Oscar at the 77th Annual Academy Awards.

A special book and CD edition of the bestselling The Gruffalo.

A mouse took a stroll through the deep dark wood.
A fox saw the mouse and the mouse looked good.

Walk further into the deep dark wood, and discover what happens when a quick-witted mouse comes face to face with an owl, a snake . . . and a hungry Gruffalo!

Julia Donaldson and Axel Scheffler's The Gruffalo is an undisputed modern classic and has become a best-selling phenomenon across the world with over 13.5 million copies sold. This award-winning rhyming story of a mouse and a monster has found its way into the hearts and bedtimes of an entire generation of children and will undoubtedly continue to enchant children for years and years to come. No home should be without The Gruffalo!

The Gruffalo Book and CD Pack features the classic story with a stunning redesigned cover and finish, and a story CD read aloud by actress Imelda Staunton, making it a must-have addition to the bookshelves of all Donaldson and Scheffler fans - big and small!

Other available book and CD packs with redesigned covers are The Gruffalo's Child, Room on the Broom, The Snail and the Whale, The Smartest Giant in Town, Monkey Puzzle, Charlie Cook's Favourite Book, and A Squash and a Squeeze.