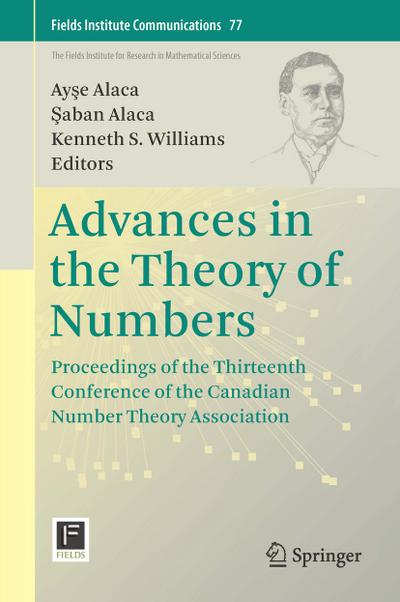 Advances in the Theory of Numbers

The theory of numbers continues to occupy a central place in modern mathematics because of both its long history over many centuries as well as its many diverse applications to other fields such as discrete mathematics, cryptography, and coding theory. The proof by Andrew Wiles (with Richard Taylor) of Fermat's last theorem published in 1995 illustrates the high level of difficulty of problems encountered in number-theoretic research as well as the usefulness of the new ideas arising from its proof.

The thirteenth conference of the Canadian Number Theory Association was held at Carleton University, Ottawa, Ontario, Canada from June 16 to 20, 2014. Ninety-nine talks were presented at the conference on the theme of advances in the theory of numbers. Topics of the talks reflected the diversity of current trends and activities in modern number theory. These topics included modular forms, hypergeometric functions, elliptic curves, distribution of prime numbers, diophantine equations, L -functions, Diophantine approximation, and many more. This volume contains some of the papers presented at the conference. All papers were refereed. The high quality of the articles and their contribution to current research directions make this volume a must for any mathematics library and is particularly relevant to researchers and graduate students with an interest in number theory. The editors hope that this volume will serve as both a resource and an inspiration to future generations of researchers in the theory of numbers.

Collects research papers devoted to topics in different areas of current research in number theory together in one volume
Preface.- List of lectures.- List of participants.- Identities for Logarithmic Means (B.C. Berndt, S. Kim).- Universal Thickening of the Field of Real Numbers (A. Connes, C. Consani).- Moments of Zeta and Correlations of Divisor-sums (B. Conrey, J.P. Keating).- A Note on the Theorem of Maynard and Tao (T. Freiberg).- A Prime Analogue of Roth's Theorem in Function Fields (Y.R. Liu, C.V. Spencer).- The Distribution of Self-Fibonacci Divisors (F. Luca, E. Tron).Some Remarks on Automorphy and the Sato-Tate Conjecture (M.R. Murty, V.K. Murty).- Division Polynomials with Galois Group SU3(3).2 = G2(2) (D.P. Roberts).- A variant of Weyl's Inequality for Systems of Forms and Applications (D. Schindler).- The Breuil-Schneider Conjecture, a Survey (C.M. Sorensen).