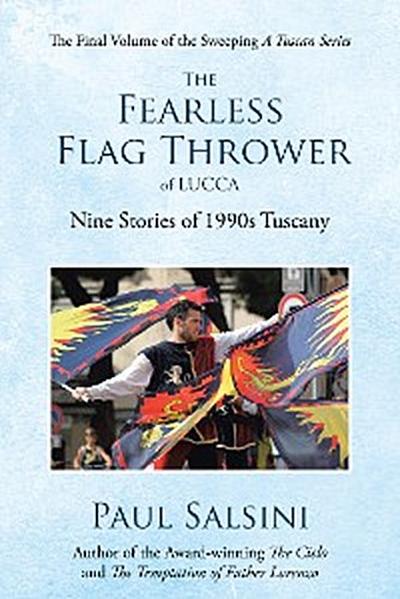 The Fearless Flag Thrower of Lucca

A TUSCAN SERIES CONCLUDED
IN PAUL SALSINIS FIRST NOVEL OF THIS SERIES, The Cielo: A Novel of Wartime Tuscany (first place winner, Council for Wisconsin Writers and Midwest Independent Publishers Association), terrified villagers were trapped in a farmhouse during World War II. In the second, Sparrows Revenge: A Novel of Postwar Tuscany, a partisan hunted down a collaborator of a horrific massacre. In the third, Dinos Story: A Novel of 1960s Tuscany, a boy came of age during the devastating flood of Florence in 1966. Then the characters entered a new decade in The Temptation of Father Lorenzo: Ten Stories of 1970s Tuscany (first place winner, Midwest Independent Publishers Association). In the next, these beloved characters, along with a few new friends and relatives, returned in A Piazza for SantAntonio, Five Novellas of 1980s Tuscany.

NOW, IN THIS, THE FINAL VOLUME of the series, Father Lorenzo has a surprise reunion, Lucia and Paolo celebrate their fiftieth wedding anniversary, Anna and a television priest become friends, a supermarket threatens SantAntonios shops, a new book celebrates Cortona, Ezios novel becomes a movie, and a shipload of Albanian refugees brings a new life to Dino and Sofia. In the title story, a long tradition in the art of flag throwing is shattered at a festival in Lucca.