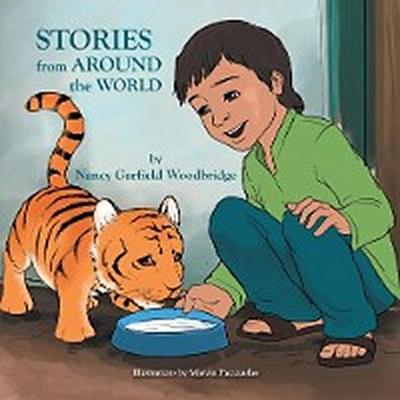 Stories from Around the World

The Rainbird - The land is in drought. There is danger that the herds of goats may die because there is no grass to eat and no water to drink. Gideon has heard of the Rainbird that lives high up at the top of a mountain in Kenya in East Africa, and if seen could bring his tribe rain. Gideon climbs to the top of the mountain against his parents wishes to try to save his tribe and the animals. After he climbs the mountain trying to find the Rainbird, he comes down the mountain not sure if he has seen it. His feet are torn and bleeding from the climb and waiting for him at the bottom of the mountain is his little brother Peter who helps him get home to their hut safely.Shanti Means Peace - This is the story of a baby tiger whose parents are man-eaters and have beenkilled by the villagers. Kallu, a small boy befriends the little tiger and names him Shanti which means peace. Even though Shanti has proven himself trustworthy, Kallus father and the other villagers plan to kill him. Kallu warns his friend the little tiger to stay away. This story has a surprising ending.

Gideons Dream - Gideon and his brother Peter are out exploring the forest. On that day, they comeupon a monkey who is severely injured. He has fallen from a tall tree. They stop what they are doing and carry him to the medicine man. He gives them potions and advice on how to help the monkey. At the same time, one of their fathers goats becomes ill and the medicine man helps to heal him. The medicine man checks all of their fathers other goats for illness. As Gideon watches the medicine man heal the animals and people, he wants to learn his secrets so that one day when he grows up he, too, can help his tribe.