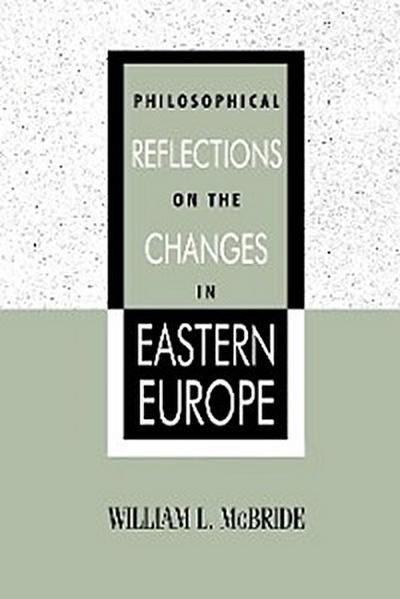 Philosophical Reflections on the Changes in Eastern Europe

The dramatic events of 1989 and their aftermath raise fundamental questions about the nature of social and intellectual change, about the relation of philosophy to politics, and above all about human values within the global structures of today. This book offers a sober, critical analysis of the post-Marxist realities of the old Eastern Bloc and provides an overview of significant aspects of both the 'bygone era' and the present situation in the region. It analyzes the phenomenon of ideological conversation, re-examines the relationship of philosophy to politics, and revisits questions about freedom, democracy, justice, civil society, religion, nationalism, and human relationships, in light of the changes there, together with the entire question of 'globalization.'
In this timely book, two philosophers_one American, one Bulgarian_explore the significance of the changes in Eastern Europe that began in 1989, and offer two alternative perspectives about them. The momentous events taking place in this region challenge philosophers to look for deeper understandings and explanations than are called for in purely strategic, political accounts. Philosophical Reflections on the Changes in Eastern Europe is written with an explicit awareness of the great differences_in cultural traditions, recent history, and current conditions_among the different regions and countries of Central and Eastern Europe, but the authors focus above all on certain significant commonalities that are fully understandable only within a larger, global context. They explore such issues as the role of ideology, past and present; 'conversions,' real or apparent, of intellectuals; the place of philosophers in politics; the relationship between democratic slogans and everyday realities; and special concerns of women. Social and political philosophers, political scientists, and scholars of Eastern Europe will want to have this book on their shelves.
Part 1 Acknowledgements
Part 2 Introduction

Chapter 8 6 The Throne, The Altar, and The Cottage

Chapter 9 7 Worldviews: From One Materialism to Another

Part 11 About the Author