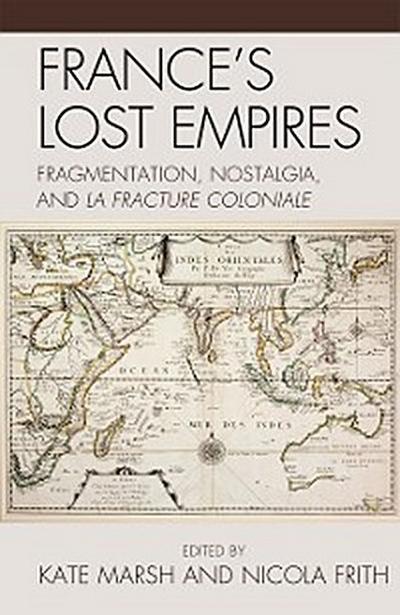 This collection of essays investigates the fundamental role that the loss of colonial territories at the end of the
Ancient Regime and post-World War II has played in shaping French memories and colonial discourses. In identifying loss and nostalgia as key tropes in cultural representations, these essays call for a re-evaluation of French colonialism as a discourse informed not just by narratives of conquest, but equally by its histories of defeat.
France's Lost Empires brings together ten essays that collectively investigate the historical, cultural, and political legacies of French colonialism and, specifically, the endings of the French empire(s). Combining analyses of three "lost" territories (Canada, India, and Saint Dominigue) of the "first" French colonial empire, that of the Ancien Regime, with investigations of the decolonization of the "new" colonies of the "second" French overseas empire (specifically in North Africa), the essays presented here investigate the ways in whicih colonial loss has been absorbed and narrativized within French culture and society, and how nostalgia for that past has played a fundamental role in shaping French colonial discourses and memories. Beginning with the Haitian Revolution and its historicization during the 1820s and ending with an examination of the "postcolonial" republic at the end of the twentieth century, the chronological structure of the volume serves to reveal the extent to which the memories of territorial loss have been sustained throughout French colonial history and remain evident in current metropolitan representations and memories of empire.

In analyzing the longevity of these tropes of loss and nostalgia, and their importance in shaping France's identity as a colonial power both during and after periods of colonization,
France's Lost Empires reveals a basic premise: it is not simply successful conquest which creates a self-validating colonial discourse; failure can do so too. Indeed, the pervasive and tenacious nostalgia for past colonial glories, variously identified by the contributors to this volume, suggests that, for some, the emotional attachment to France's colonies has not waned and remians today as it was in nineteenth-century France.
Chapter 1 Introduction: Territorial Loss and the Construction of French Colonial Identities: 1763-192

Chapter 3 Chapter 1: "Remember Saint Dominque": Accounts of the Haitian Revolution by Refugee Planters in Paris and Colonial Debates under the Restoration: 1814-25

Chapter 4 Chapter 2: A Celebration of Empire: Nostalgic Representations of
l'Inde francaise in Chocolat Suchard's Colonial Collecting Cards of the 1930s

Part 6
Part II: Narratives of Loss: Decolonization Under the Fourth and Fifth Republics

Chapter 7 Chapter 4: Between History, Memory, and Mythology: The Algerian Education of Albert Camus

Chapter 8 Chapter 5: Alexandre Arcady and the Rewriting of French Colonial History in Algeria

Chapter 10 Chapter 6: Compensating for
l'Inde perdue: Narrating a "Special Relationship" Between France and India in Romanticized Tales of the Indian Uprisings (1857-58)