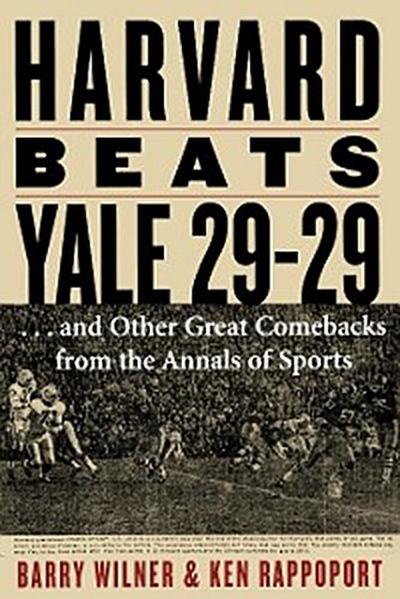 When Harvard football team tied Yale in 1968 by making up a 16-point deficit in less than a minute, the
Crimson the following morning carrried this headline: "Harvard Beats Yale, 20-29." This and twenty other unlikely comebacks are the subject of this books, froom the 2005 Pittsburgh Steelers to the 1914 Boston Braves.
When Harvard came back from a 16-point deficit with less than a minute to go to tie Yale in their now-famous 1968 gridiron tilt, the headline in the Harvard Crimson the following Monda proudly boasted, "Harvard Beats Yale, 29-29." This and nineteen other improbable comebacks are the subjects of Wilner and Rappoport's latest volume of extraordinary achievements from the world of sports, and include the 1914 "miracle" Braves, Billy Casper's incredible rally to beat Arnold Palmer in the 1966 U.S. Open, the New York Giants' magical playoff run in 1951, and others. Also included are sidebars on individual athletes whose "combacks" included overcoming disease (i.e. Lance Armstrong) and reviving a career (i.e. Michael Jordan and Muhammad Ali).