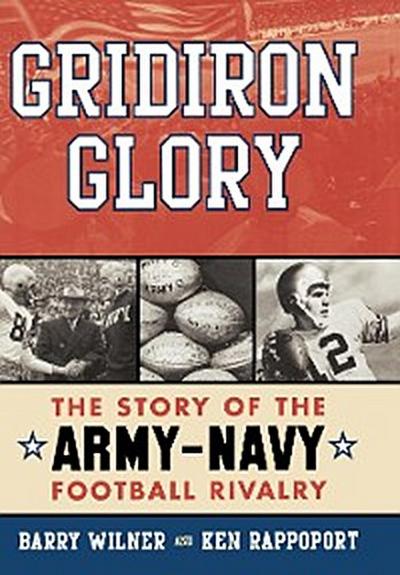 A rivalry like no other, Army versus Navy receives due recognition in this colorful, thorough history.
Consistently ranked among the top ten college football rivalries by fans and pundits alike-and often ranked among the top five-the annual Army-Navy game is the one rivalry that, as one commentator has noted, "stops the most powerful men and women in the world in their tracks for one day a year." It is also quite possible that it is the only rivalry to raise over $58 million in war bonds (1944 game), have an outcome so contentious that the game had to be suspended for six years by the President (1893), or be played in the Rose Bowl (1983), requiring a military "airlift" of nine thousand cadets and midshipmen to California.
But Army-Navy is first and foremost about football, and as Barry Wilner and Ken Rappoport relate in this engaging history, it may be college football in its purest form-and not just as a "training ground for the NFL." Though struggling for national ranking, the service academies have done surprisingly well over the years given their recruiting handicap, producing five Heisman Trophy winners and a number of national champions. The rivalry's most successful player may have been Roger Staubach, Heisman winner and Hall of Fame quarterback, who led the Dallas Cowboys to two Super Bowls in the 1970s following his four-year mandatory service in the U.S. Navy.

The Army-Navy rivalry is also about traditions, and in a concluding chapter on the 2004 game, the authors take us through the pageantry: the march into the stadium by the student bodies of both schools; freshman push-ups after each score; and the final, moving show of sportsmanship following the game as thousands of cadets and midshipmen stand at attention while the alma mater of each school is played by their respective bands. A rivalry like no other, Army versus Navy receives due recognition in this colorful, thorough history.
1 Acknowledgments

16 War Zone: The SEAL and the Soldier

20 The Stadiums: Of Bowls and Vets and Dumps