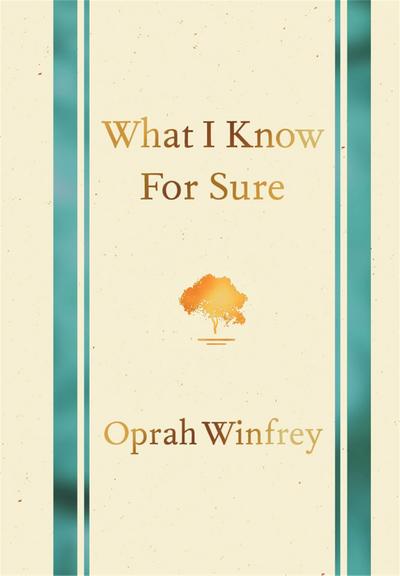 What I Know for Sure

Winfrey, OprahThrough the power of media, Oprah Winfrey has created an unparalleled connection with people around the world. As host and supervising producer of the history-making The Oprah Winfrey Show, editorial director of O, The Oprah Magazine, and the CEO of OWN: Oprah Winfrey Network, she has entertained, enlightened, and uplifted millions of viewers for more than twenty-five years. Her accomplishments as a global media leader and philanthropist have established her as one of the most respected and admired public figures today. She is the author of What I Know For Sure, a collection of her contributions to her widely popular column in O, The Oprah Magazine.

Candid, moving, exhilarating, uplifting, and frequently humorous, the words Oprah shares in What I Know For Sure shimmer with the sort of truth that readers will turn to again and again.

As a creative force, student of the human heart and soul, and champion of living the life you want, Oprah Winfrey stands alone. Over the years, she has made history with a legendary talk show (the highest-rated program of its kind), launched her own television network, become the USA's only African-American billionaire, and been awarded both an honorary degree by Harvard University and the Presidential Medal of Freedom. From all her experiences, she has gleaned life lessons - which, for fourteen years, she's shared in O, The Oprah Magazine's widely popular 'What I Know For Sure' column, a monthly source of inspiration and revelation.

Now, for the first time, these thoughtful gems have been revised, updated, and collected in What I Know For Sure, a beautiful book with a ribbon marker, packed with insight and revelation from Oprah Winfrey. Organized by theme - joy, resilience, connection, gratitude, possibility, awe, clarity, and power - these essays offer a rare, powerful and intimate glimpse into the heart and mind of one of the world's most extraordinary women, while providing readers a guide to becoming their best selves.