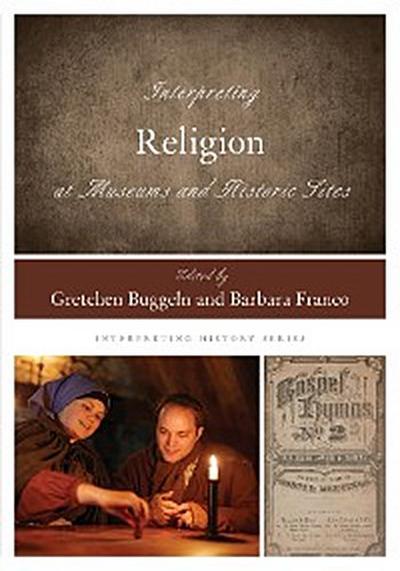 This book explores the practical and interpretive problems that museums encounter when they include religion in their interpretation:

These and other questions are addressed in a series of interpretive essays and case studies that capture the experimental and innovative religion programming that is beginning to find a place in American history museums.


An introduction by Gretchen Buggeln places the subject of religion and museums in the intellectual context of national and international scholarship. Case studies cover a range of topics and venues that include outdoor museums, historic houses and exhibits; interpretive issues of secular and sacred contexts; and interpretive techniques like dialogue, music and first person accounts. A concluding essay suggests a publicly oriented historiography of religion for American museums and historic sites.


“In God We Trust” – Interpreting Religion in the US Capitol


Interpreting Religion in the Life of a Founding Father


Revisiting the Historical Role of the ABCFM Missionaries in Hawaii


Interpreting Religion at the Tenement Museum


Interpreting Tolerance to a Skeptical World: The Case of Colonial Newport and Providence


Interpreting Religion at The American Revolution Museum at Yorktown


Chosen Food: Eggrolls, Oreos and Judaism in the Museum


Black Sacred Objects and the Matter of Religious Meanings: A CaseStudy from the National Museum of African American History & Culture


Religion in Early America: An Exhibition at the National Museum of American History

The Rosenbach and the Rare Book Department, Free Library of Philadelphia


Religion on Display: Three Exhibitions at the Free Library of Philadelphia and the Rosenbach


Open the Doors and See all the People: Interpreting Pennsylvania German Material Culture and Religion

Chapter 5. Issues in Historical Interpretation: Why Interpreting Religion is So Difficult

Chapter 8. Interpreting Religion at Museums and Historic Sites: The Work Ahead