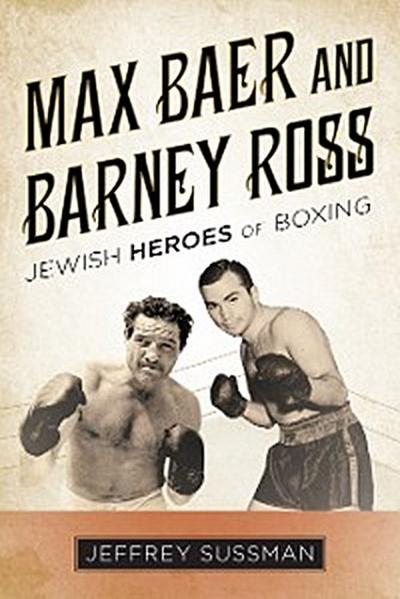 This book follows the lives and careers of two Jewish boxers, Max Baer and Barney Ross. Fighting in the 1920s and 1930s when anti-Semitism was rampant, American Jews found symbols of strength and courage in these two world champions. This book provides a vivid picture of Baer and Ross as they fought opponents in the ring and prejudice outside it.
In the 1920s and 30s, anti-Semitism was rife in the United States and Europe. Jews needed symbols of strength and demonstrations of courage against their enemies, and they found both in two champions of boxing: Max Baer and Barney Ross. Baer was the only Jewish heavyweight champion in the twentieth century, while Ross was considered one of the greatest welterweight and lightweight champions of the era. Although their careers never crossed paths, their boxing triumphs played a common role in lifting the spirits of persecuted Jews.

In Max Baer and Barney Ross: Jewish Heroes of Boxing, Jeffrey Sussman chronicles the lives of two men whose successful bouts inside the ring served as inspiration for Jewish fans across the country and around the world. Though they came from very different backgrounds—Baer grew up on his family’s ranch in California, while Ross roamed the tough streets of Chicago and was a runner for Al Capone—both would bask in the limelight as boxing champions. Their stories include legendary encounters with such opponents as Jimmy McLarnin (known as the Jew Killer), Max Schmeling (Hitler’s favorite athlete), and Primo Carnera (a sad giant controlled and mistreated by gangsters).


While recounting the exploits of these two men, the author also paints an evocative picture of boxing and the crucial role it played in an era of anti-Semitism. A vivid and engaging look at these two heroes and the difficult era in which they lived, Max Baer and Barney Ross will appeal to boxing fans, sports historians, and anyone interested in Jewish history.


Chapter 8: The Man in the Movies


Chapter 9: After the Last Bell