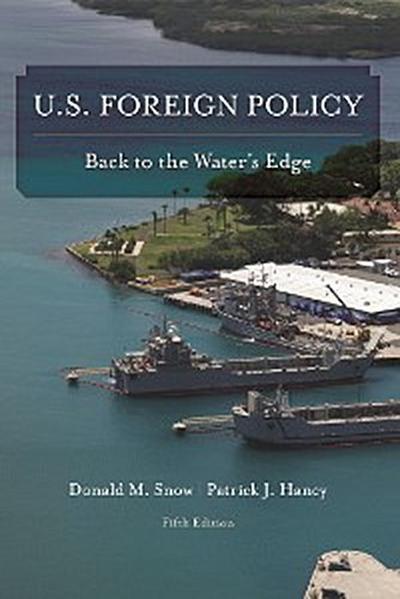 This newest edition of U.S. Foreign Policy explores three related themes: the essential difference between domestic and foreign policies; the existence of political situations that are both international and domestic, or intermestic; and the hyper-partisanship and political polarization that dominates contemporary American politics.
U.S. Foreign Policy: Back to the Water’s Edge is based on the old idea that despite domestic differences and party politics, Americans should unite “at the water’s edge” and present a cohesive front to a hostile world. The fifth edition explores this theme through coverage of the Trump administration, its early policies, and how Trump’s initiatives fit into the broader historical patterns of foreign policy in the United States.

More compact than most of its competitors, the fifth edition packs necessary information and concepts into a lean but readable format. It contains rich historical content, providing the reader with snapshots of some of the truly classic highlights—and lowlights—of America’s record in foreign affairs. Written with the student reader in mind, each chapter offers several pedagogical aids designed to reinforce and extend comprehension of the material.


This text is also accompanied by a companion reader. Regional Cases in Foreign Policy, Second Edition, was written by Don Snow with the specific intention of providing material and perspectives not contained in the text. The reader contains fourteen mini-cases that can accompany classroom discussions or lectures on subjects as diverse as relations with Russia, Israel, or the Islamic State; specific questions like the border fence with Mexico; U.S.-Cuban relations; or the British withdrawal from the European Union (Brexit). Case examples are drawn from all parts of the world.