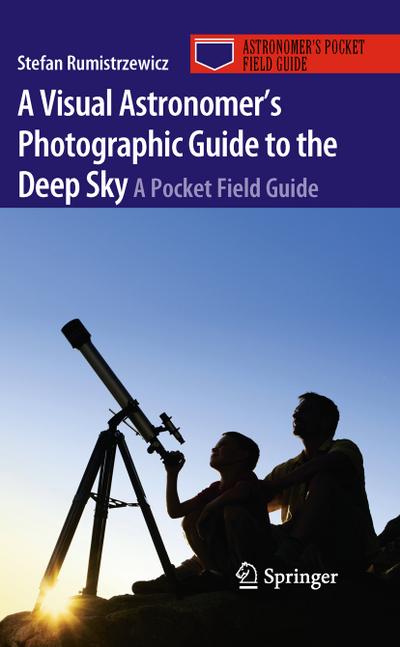 A Visual Astronomer’s Photographic Guide to the Deep Sky

My love affair with the cosmos began, probably, when I stared, open-jawed, for two hours at the film Star Wars. Although I was only three at the time, I can remember subsequently drawing pictures of stars and planets and 'X-wings.' I quickly became a science fiction addict, watching re-runs of Star Trek and various other series. And so, I desperately wanted a way of seeing some of these objects for myself. My parents bought me a cheap (supermarket) 'scope when I was 11, which I then proceeded to set up in my sister's room (the only one with a southernly view) and stargaze through her window. Neither my father nor I could ever get it to focus properly. Of course, at the time, I had no knowledge or understanding of air currents, seeing, or indeed how to use a telescope or star chart. Nevertheless, even with the horrendous optics of this small telescope I could make out some craters on the Moon - I was hooked!I decided to 'save up' for something better. After several birthdays I finally bought myself a reasonable 'scope - a 9.25 inch Dobsonian, and spent many a clear night sitting on the garage roof (my sister wanted her room back!) gazing at the wonders of the universe.Soon after, university beckoned. I studied Chemistry, with a subsidiary in Astronomy. Although I very much enjoyed the latter, I was unable to continue as the university (at the time) did not offer Astronomy as a major degree. And so, my hobby took an enforced break, which was then extended by teacher training, getting married, and emigrating to east Africa. It was there, under the clear equatorial skies of Kenya, that my love of the cosmos was rekindled and my wife bought me a 5" Newtonian telescope for my birthday. I was astonished by the things I was able to see with such a small aperture. It just goes to show the difference a truly dark sky makes.Since then, I have been interested in visual astronomy and what deep sky objects really look like. Having subsequently returned to the UK and settled in South Bedfordshire, I developed a keen interest in sketching at the eyepiece and have spent many a nocturnal hour gazing through my 'scope, having told my wife I wouldn't be outside for 'too long.'Eventually, I began to wonder why there wasn't a book that showed photographs of the 'visual' image (i.e., what can be seen at the eyepiece). It seemed that descriptions of DSOs varied slightly from writer to writer and Hubble Space Telescope images told me very little about what I could actually see in my backyard. That was how this book was conceived. And so now, here it is......I trust that it will give you as much pleasure to read as it was for me to write.Enjoy and clear skies!
Over the last 15 years or so there has been a huge increase in the popularity of astrophotography with the advent of digital SLR cameras and CCD imagers. These have enabled astronomers to take many images and, indeed, check images as they scan the skies. Processing techniques using computer software have also made 'developing' these images more accessible to those of us who are 'chemically challenged!' And let's face it - some of the pictures you see these days in magazines, books, and on popular web forums are, frankly, amazing! So, why bother looking through the eyepiece you ask? Well, for one thing, setting up the equipment is quicker. You just take your 'scope out of the garage or, if you're lucky enough to own one, open the roof of your observatory, align the 'scope and off you go. If you have an equatorial mount, you'll still need to roughly polar align, but this really takes only a few moments. The 'imager' would most likely need to spend more time setting up. This would include very accurate polar alignment (for equatorial mounts), then finding a guide star using his or her finder, checking the software is functioning properly, and c- tinuous monitoring to make sure the alignment is absolutely precise throu- out the imaging run. That said, an imager with a snug 'obsy' at the end of the garden will have a quicker time setting up, but then again so will the 'visual' observer.
Aimed at observers who don't examine deep-sky objects because they don't know what to look for, this volume focuses on these objects and provides photographs of all those discussed-exactly as they would be seen from amateur astronomers' suburban locations.
Illustrates exactly what deep sky objects will actually look like when observed, not as they look with enhanced imaging and processing
Observing Plans and Techniques.- Accessories and 'Pimping' Your 'Scope.- Sketching.- Constellation Observing Lists and Photos.- Observation Records.