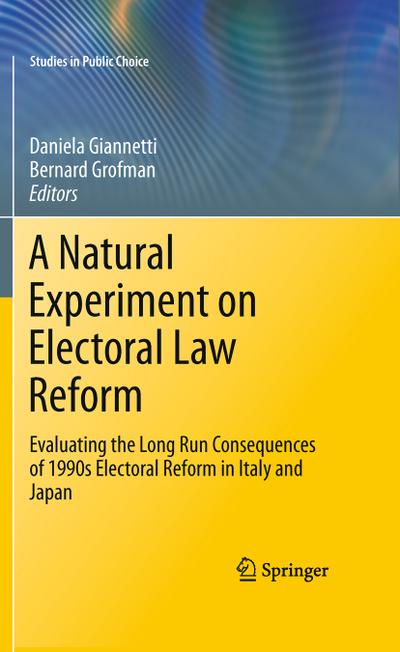 In the early 1990s, major electoral reforms took place in both Italy and Japan; each replaced a form of "proportional representation" (in which voters cast a ballot for a party list) with a "mixed member" system (in which voters cast ballots for individual candidates and party lists). The reforms were enacted by political elites in the context of divisions within the dominant party, changing patterns of party support, and party splits, in efforts to retain power while responding to charges of corruption, clientelism, and lack of accountability. The experiences of both countries provide a laboratory in which to investigate the effects and implications of the reforms, and, more broadly to analyze voter behavior in the context of institutional change.

The introduction provides an overview of post-WWII politics and electoral reform in Italy and Japan. In each of the next four chapters, specialists in Italian and Japanese electoral politics are teamed up to review data both before and after the reforms. Within this comparative framework, the authors explore such topics as changes in party competition, candidate selection mechanisms, and intra-party politics. The concluding chapter considers the longer-term consequences-both anticipated and unanticipated-of the reforms; despite superficially similar conditions, the effects in the two countries were dramatically different: in Japan, the new system has taken hold, with minor modifications, while in Italy, there was a reversion to a proportional representation system. As the essays in this volume demonstrate, to understand why similar reforms had such different effects in the two countries we must examine how electoral systems are embedded in broader institutional and social arrangements, and at the complex interplay of political geography, political history, and the rational calculations of political actors.
. Teams up experts in Italian and Japanese politics in a unique comparative analysis of electoral reforms in these countries. Considers electoral systems in political, social, and cultural context
. Features data appendices and a glossary of terms
Party Competition under New Electoral Rules in Italy and Japan 1994-2008.- The Changing Bases of Party Support in Italy and Japan: Similarities and Differences.- Nominating Candidates under New Rules in Italy and Japan: You Cannot Bargain with Resources You Do Not Have.- Factional Politics in Italy and Japan.- Electoral Reform in Italy and Japan: Unanticipated Outcomes?