The Geometry of Biological Time 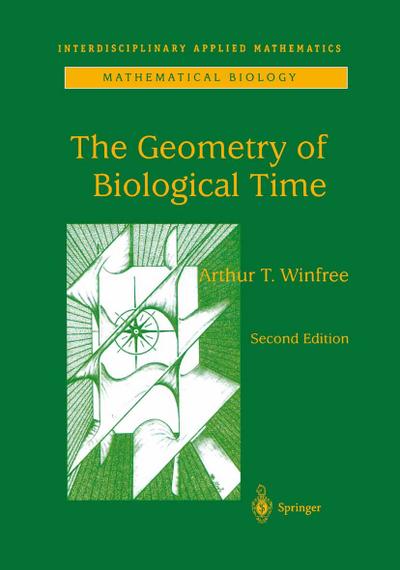 From cell division to heartbeat, clocklike rhythms pervade the activities of every living organism. The cycles of life are ultimately biochemical in mechanism but many of the principles that dominate their orchestration are essentially mathematical.
The Geometry of Biological Time describes periodic processes in living systems and their non-living analogues in the abstract terms of nonlinear dynamics. Enphasis is given in phase singularities, waves, and mutual synchronization in tissues composed of many clocklike units. Also provided are descriptions of the best-studied experimental systems such as chemical oscillators, pacemaker neurons, circadian clocks, and excitable media organized into biochemical and bioelectrical wave patterns in two and three dimensions. No theoretical background is assumed; the required notions are introduced through an extensive collection of pictures and easily understood examples. This extensively updated new edition incorporates the fruits of two decades' further exploration guided by the same principles. Limit cycle theories of circadian clocks are now applied to human jet lag and are understood in terms of the molecular genetics of their recently discovered mechanisms. Supercomputers reveal the unforeseen architecture and dynamics of three-dimensional scroll waves in excitable media. Their role in life-threatening electrical aberrations of the heartbeat is exposed by laboratory experiments and corroborated in the clinic. These developments trace back to three basic mathematical ideas.
This is an update of a classic mathematical biology book by an author who is a leader in the field. It deals with dynamics of processes that repeat themselves regularly. This cycle of change is an ubiquitous principle of organization in living systems. In this new edition the author addresses areas that have come to fruition since 1980 and also concentrates on areas which he personally feels will see much activity in future.
1980 Preface * 1999 Preface * 1999 Acknowledgements * Introduction * 1 Circular Logic * 2 Phase Singularities (Screwy Results of Circular Logic) * 3 The Rules of the Ring * 4 Ring Populations * 5 Getting Off the Ring * 6 Attracting Cycles and Isochrons * 7 Measuring the Trajectories of a Circadian Clock * 8 Populations of Attractor Cycle Oscillators * 9 Excitable Kinetics and Excitable Media * 10 The Varieties of Phaseless Experience: In Which the Geometrical Orderliness of Rhythmic Organization Breaks Down in Diverse Ways * 11 The Firefly Machine 12 Energy Metabolism in Cells * 13 The Malonic Acid Reagent ('Sodium Geometrate') * 14 Electrical Rhythmicity and Excitability in Cell Membranes * 15 The Aggregation of Slime Mold Amoebae * 16 Numerical Organizing Centers * 17 Electrical Singular Filaments in the Heart Wall * 18 Pattern Formation in the Fungi * 19 Circadian Rhythms in General * 20 The Circadian Clocks of Insect Eclosion * 21 The Flower of Kalanchoe * 22 The Cell Mitotic Cycle * 23 The Female Cycle * References * Index of Names * Index of Subjects