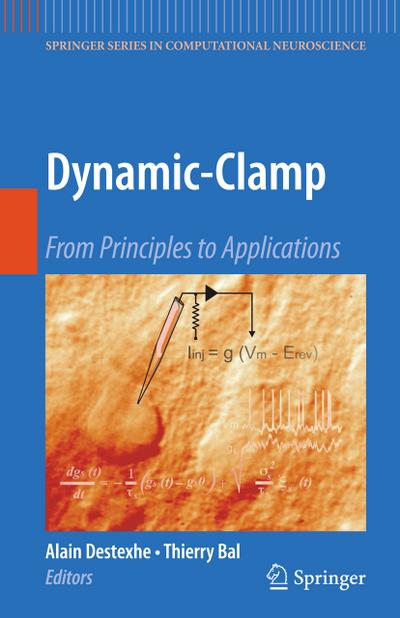 Dr. Alain Destexhe and Dr.Thierry Bal, are Research Directors at the Centre National de la Recherche Scientifique (CNRS), a governmental research institution in France. Their laboratories are located in the CNRS campus of Gif-sur-Yvette in the research unit (Unité de Neurosciences Intégratives et Computationnelles, UNIC). Gif-sur-Yvette is solely devoted to research and provides an ideal environment for close interaction between theory and experiments, as exemplified by the numerous publications on dynamic-clamp experiments co-authored by Bal and Destexhe. Each editor holds Ph.D.s in both biophysics and neurobiology, respectively. Dr. Destexhe is also Chief Editor of the Journal of Computational Neuroscience.

Dynamic-clamp is a fascinating electrophysiology technique that consists of merging living neurons with computational models. The dynamic-clamp (also called "conductance injection") allows experimentalists and theoreticians to challenge neurons (or any other type of cell) with complex conductance stimuli generated by a computer.

The technique can be implemented from neural simulation environments and a variety of custom-made or commercial systems. The real-time interaction between the computer and cell also enables the design of recording paradigms with unprecedented accuracy via a computational model of the electrode. Dynamic-Clamp: From Principles to Applications contains contributions from leading researchers in the field, who investigate these paradigms at the cellular or network level, in vivo and in vitro, and in different brain regions and cardiac cells. Topics discussed include the addition of artificially-generated synaptic activity to neurons; adding, amplifying or neutralizing voltage-dependent conductances; creating hybrid networks with real and artificial cells; attaching simulated dendritic tree structures to the living cell; and connecting different neurons.

This book will be of interest to experimental biophysicists, neurophysiologists, and cardiac physiologists, as well as theoreticians, engineers, and computational neuroscientists. Graduate and undergraduate students will also find up-to-date coverage of physiological problems and how they are investigated.