1,001 Celestial Wonders to See Before You Die 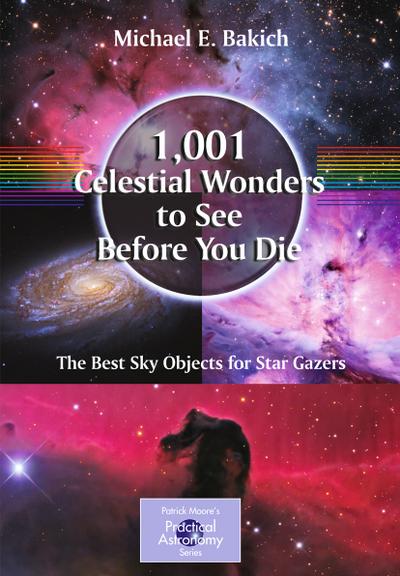 Michael E. Bakich lives in Milwaukee, and is a Senior Editor at "Astronomy" magazine. He has previously published "The Cambridge Guide to the Constellations" (1995), "The Cambridge Planetary Handbook" (2000), and "The Cambridge Encyclopedia of Amateur Astronomy" (2003). In addition he has written and edited the following "Astronomy" 'bookazines' of around 100 pgs., each: "Atlas of the Stars" (2006), "Hubble's Greatest Pictures" (2007), and "The 100 Most Spectacular Sky Wonders" (2008). He is also the author of many recent articles.
1,001 Celestial Wonders is a guide to the night sky's brightest and most fascinating objects. Each target is accessible to amateur astronomers using medium-sized telescopes from a dark site. In fact, many are so bright they remain visible under moderate light pollution, as from the outskirts of a city or the suburbs of a town. The book provides a chronological target list, making it easy to use. No matter what night you choose, this book will show you many of the most memorable objects to observe, whether you are using a small telescope or even binoculars, or an instrument of larger aperture.
This is far more than just a list of interesting objects. It is structured so that objects of various observing difficulty are included, which will help readers become better observers, both encouraging beginners and challenging long-time amateur astronomers. This book is designed to be easy-to-use at the telescope, and observers will appreciate each object's standardized layout and the book's chronological organization.

Finally, many amateur astronomers function best when presented with a list! Even the Meade Autostar® controller features a 'best tonight' list (although the list is far less comprehensive and detailed than the catalog provided in this book), a feature that has proved extremely popular. 1,001 Celestial Wonders offers a life-list of objects any observer would be proud to complete.
This guide to the night sky's brightest and most fascinating objects features celestial bodies that are accessible to amateur astronomers using medium-sized telescopes. With its chronological target list, you can enjoy sky-watching on any night of your choice.
Highlights the 1,001 best and brightest sky objects to observe
January.- February.- March.- April.- May.- June.- July.- August.- September.- October.- November.- December.