Black Panther, Book 1: A Nation Under Our Feet 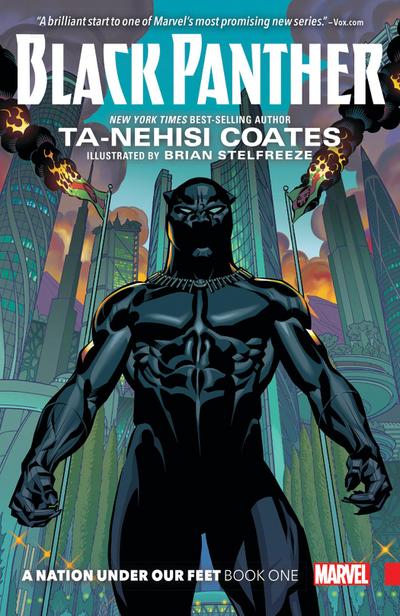 Ta-Nehisi Coates is an American writer, journalist, and educator. Coates is a National Correspondent for The Atlantic, where he writes about cultural, social and political issues, particularly as regards African-Americans. Coates has worked for The Village Voice, Washington City Paper, and Time. He has contributed to The New York Times Magazine, The Washington Post, The Washington Monthly, O, and other publications. In 2008 he published a memoir, The Beautiful Struggle: A Father, Two Sons, and an Unlikely Road to Manhood. His second book, Between the World and Me, was released in July 2015. It was nominated for a 2015 National Book Award for Nonfiction. He was the recipient of a "Genius Grant" from the John D. and Catherine T. MacArthur Foundation in 2015
MacArthur Genius and National Book Award-winner T- Nehisi Coates (Between the World and Me) takes the helm, confronting T'Challa with a dramatic upheaval in Wakanda. When a superhuman terrorist group that calls itself The People sparks a violent uprising, the land famed for its incredible technology and proud warrior traditions will be thrown into turmoil. If Wakanda is to survive, it must adapt - but can its monarch survive the necessary change? Collecting: Black Panther 1-4