The Philosophy of Recognition 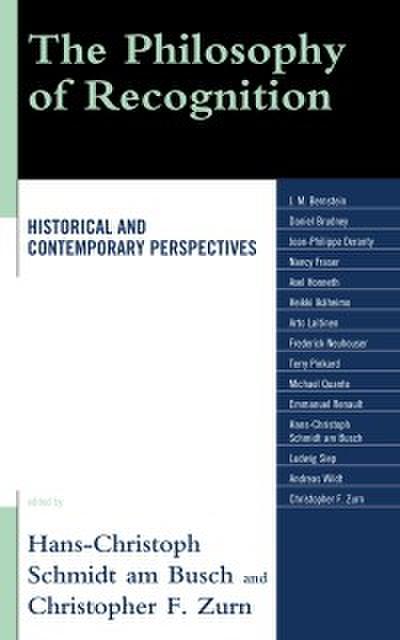 This volume collects original, cutting-edge essays on the philosophy of recognition by international scholars eminent in the field. By considering the topic of recognition as addressed by both classical and contemporary authors, the volume explores the connections between historical and contemporary recognition research and makes substantive contributions to the further development of contemporary theories of recognition.
The theory of recognition is now a well-established and mature research paradigm in philosophy, and it is both influential in and influenced by developments in other fields of the humanities and social sciences. From debates in moral philosophy about the fundamental roots of obligation, to debates in political philosophy about the character of multicultural societies, to debates in legal theory about the structure and justification of rights, to debates in social theory about the prospects and proper objects of critical theory, to debates in ontology, philosophical anthropology and psychology about the structure of personal and group identities, theories based on the concept of intersubjective recognition have staked out central positions. At the same time, contemporary theories of recognition are strongly, perhaps indissociably, connected to themes in the history of philosophy, especially as treated in German idealism. This volume compromises a collection of original papers by eminent international scholars working at the forefront of recognition theory and provides an unparalleled view of the depth and diversity of philosophical research on the topic. Its particular strength is in exploring connections between the history of philosophy and contemporary research by combining in one volume full treatments of classical authors on recognition_Rousseau, Kant, Fichte, Hegel, Marx, Freud_with cutting edge work by leading contemporary philosophers of recognition, including Fraser, Honneth, and others.
Chapter 1 Introduction
Chapter 2 Rousseau and the Human Drive for Recognition (Amour Propre)

Chapter 6 Recognition, the Right, and the Good

Chapter 7 Producing For Others

Chapter 10 Work and Recognition: A Redefinition

Chapter 11 Taking on the Inheritance of Critical Theory: Saving Marx by Recognition?

Chapter 12 Can the Goals of the Frankfurt School be Achieved by a Theory of Recognition?

Chapter 13 Critique of Political Economy and Contemporary Critical Theory: A Defense of Honneth's Theory of Recognition

Chapter 14 On the Scope of 'Recognition': The Role of Adequate Regard and Mutuality

Chapter 15 Making the Best of What We Are: Recognition as an Ontological and Ethical Concept