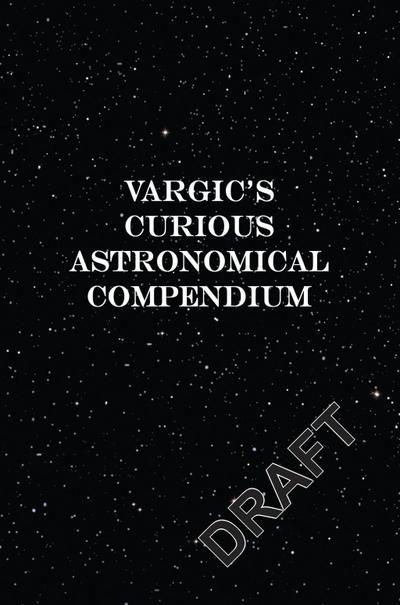 Vargic, MartinMartin Vargic is an amateur graphic designer from Slovakia who rose to international fame in late January 2014, when his work 'Map of the Internet 1.0' went viral, generating hundreds of thousands of hits and Facebook shares. His first book, Vargic's Miscellany of Curious Maps, pulled together more than 1,800 clichés and pop culture references into a series of maps based on stereotypical views of the world. It too received immediate media attention, and was prominently featured on a multitude of sites such as Slate, Huffington Post, Radio Times and many others.

Take a trip to outer space with this weird and wonderful guide to our universe, the perfect gift for both young and old

Vargic's beautifully innovative designs will help to explain all of the bizarre and fascinating aspects of the cosmos; from the history of the universe to what makes up our solar system and even how human life fits into the wider picture.

Be taken on an unforgettable journey through space with chapters on . . .
· Exploring the Cosmos
· The Night Sky
· Maps of the Inner Solar System
· Timeline of the Universe
· Cosmologies throughout History
· Journey Into Outer Space
· Scale of the Universe

This is a book that celebrates the scale and spectacle of the universe on every page, and one which you'll treasure forever.
_______

'Packs in so much of our astronomical knowledge, so many tidbits about the history of astronomy and space exploration that I felt wonderfully enriched by it all. It is visually striking and beautifully illustrated' Dr. Alfredo Carpineti

VARGIC'S ALTERNATIVE GUIDE TO ASTRONOMY is a breath of fresh air in this field, brilliantly combining beautiful design and accessible information. The four overarching chapters are: The History of the Universe -Solar System -Stars and Galaxies -Humans and the Universe. The book will expand on the subjects with new theories and unique content with accessible infographics and visualisations.