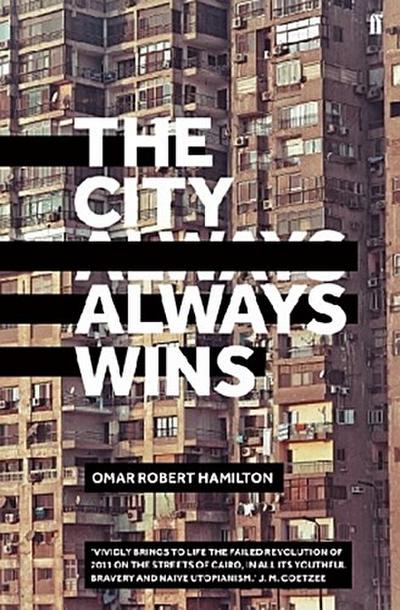 'Omar Robert Hamilton brings vividly to life the failed revolution of 2011 on the streets of Cairo, in all its youthful bravery and naive utopianism.' - JM Coetzee

'The City Always Wins is a stirring, clear, humane and immensely savvy novel about political innocence and fearlessness. Its fictive portrayals of the Egyptian 'revolution' of 2011 are nothing less than ground-breaking.' - Richard Ford

'I finished this novel with fascination and admiration. It gives a picture of the inside of a popular movement that we all saw from the outside, in countless news broadcasts and foreign-correspondent reports, a picture so vivid and powerful that it gives a passionate life and reality to what might have been perceived only as abstract principles. A thousand vivid details print themselves on the reader's memory: it will be a long time before we read anything so skilfully brought to life.' - Philip Pullman

'Few writers could capture the frenetic speed of an Internet-fuelled uprising alongside the time-stopping corporeal reality of bullet-ridden bodies, all while never losing sight of the love that powered Egypt's revolutionary moment. Omar Robert Hamilton can do all that and more. Crossing borders and generations, he brings us into the movement's effervescent hope and its crushing heartbreak, probing timeless questions about what the living owe to the dead. Unbearable. Unmissable. A dazzling debut.' - Naomi Klein

'From the chaos and torment of a revolution, and the perpetual struggle with despotism, Omar Robert Hamilton has drawn a novel of great emotional and intellectual power. The City Always Wins is a rare fiction that reminds us, with its wisdom about violence and inequality, grief and loss, how politics is for many today a way to live - and die.' - Pankaj Mishra

'The hope, the excitement, the arrogance, the disillusionment, the renewal of hope - this novel is fast, thought-provoking, and hugely entertaining.' - Roddy Doyle

We've been doing the same thing for hundreds of years. Marching, fighting, chanting, dying, changing, winning, losing . This time will be different. This time the future can still be made new.

This is a revolution. On the streets of Cairo, a violent uprising is transforming the course of modern history. Mariam and Khalil, two young activists, are swept up in the political fervour. Their lives will never be the same again.

Brave, visceral, and electric with tension, Omar Robert Hamilton's debut novel uniquely captures the feverish intensity of the 2011 Egyptian revolution. From the euphoria of mass protests to the chilling silence of the morgue, The City Always Wins is the only novel that allows readers to pierce to the bloody heart of the uprising. Intensely lyrical, yet uncompromisingly political, Omar Robert Hamilton's writing is set to become the defining voice of a revolution that promised so much to so many.
This thrilling debut is the definitive novel of the Arab Spring by an author who witnessed the revolution first hand.