The Purpose of Power: How We Come Together When We Fall Apart 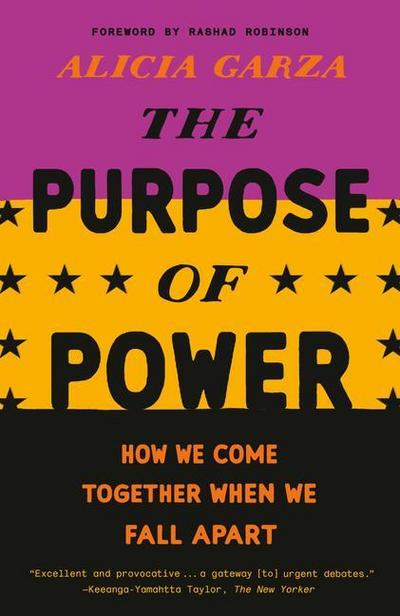 Alicia Garza is an organizer, political strategist, and cheeseburger enthusiast. She is the principal at the Black Futures Lab and the Black to the Future Action Fund, co-creator of #BlackLivesMatter and the Black Lives Matter Global Network, director of strategy and partnerships at the National Domestic Workers Alliance, and host of the Lady Don t Take No podcast.
An essential guide to building transformative movements to address the challenges of our time, from one of the country s leading organizers and a co-creator of Black Lives Matter

Excellent and provocative . . . a gateway [to] urgent debates. Keeanga-Yamahtta Taylor, The New Yorker

In 2013, Alicia Garza wrote what she called a love letter to Black people on Facebook, in the aftermath of the acquittal of the man who murdered seventeen-year-old Trayvon Martin. Garza wrote:

Black people. I love you. I love us. Our lives matter.

With the speed and networking capacities of social media, #BlackLivesMatter became the hashtag heard round the world. But Garza knew even then that hashtags don t start movements people do.

Long before #BlackLivesMatter became a rallying cry for this generation, Garza had spent the better part of two decades learning and unlearning some hard lessons about organizing. The lessons she offers are different from the rules for radicals that animated earlier generations of activists, and diverge from the charismatic, patriarchal model of the American civil rights movement. She reflects instead on how making room amongst the woke for those who are still awakening can inspire and activate more people to fight for the world we all deserve.

This is the story of one woman s lessons through years of bringing people together to create change. Most of all, it is a new paradigm for change for a new generation of changemakers, from the mind and heart behind one of the most important movements of our time.