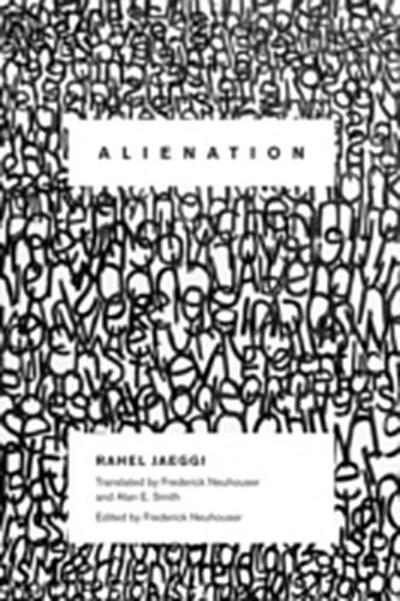 A bold defense of a neglected concept and its relevance for critical social theory.

The Hegelian-Marxist idea of alienation fell out of favor after the postmetaphysical rejection of humanism and essentialist views of human nature. In this book Rahel Jaeggi draws on the Hegelian philosophical tradition, phenomenological analyses grounded in modern conceptions of agency, and recent work in the analytical tradition to reconceive alienation as the absence of a meaningful relationship to oneself and others, which manifests in feelings of helplessness and the despondent acceptance of ossified social roles and expectations.

A revived approach to alienation helps critical social theory engage with phenomena such as meaninglessness, isolation, and indifference. By severing alienation's link to a problematic conception of human essence while retaining its social-philosophical content, Jaeggi provides resources for a renewed critique of social pathologies, a much-neglected concern in contemporary liberal political philosophy. Her work revisits the arguments of Rousseau, Hegel, Kierkegaard, and Heidegger, placing them in dialogue with Thomas Nagel, Bernard Williams, and Charles Taylor.

Foreword, by Axel Honneth
Translator's Introduction, by Frederick Neuhouser
Preface and Acknowledgments
Part 1. The Relation of Relationlessness: Reconstructing a Concept of Social Philosophy
1. "A Stranger in the World That He Himself Has Made": The Concept and Phenomenon of Alienation
2. Marx and Heidegger: Two Versions of Alienation Critique
3. The Structure and Problems of Alienation Critique
4. Having Oneself at One's Command: Reconstructing the Concept of Alienation
Part 2. Living One's Life as an Alien Life: Four Cases
5. Seinesgleichen Geschieht or "The Like of It Now Happens": The Feeling of Powerlessness and the Independent Existence of One's Own Actions
6. "A Pale, Incomplete, Strange, Artificial Man": Social Roles and the Loss of Authenticity
7. "She but Not Herself": Self-Alienation as Internal Division
8. "As If Through a Wall of Glass": Indifference and Self-Alienation
Part 3. Alienation as a Disturbed Appropriation of Self and World
9. "Like a Structure of Cotton Candy": Being Oneself as Self-Appropriation
10. "Living One's Own Life": Self-Determination, Self-Realization, and Authenticity
Conclusion: The Sociality of the Self, the Sociality of Freedom
Notes
Works Cited
Index