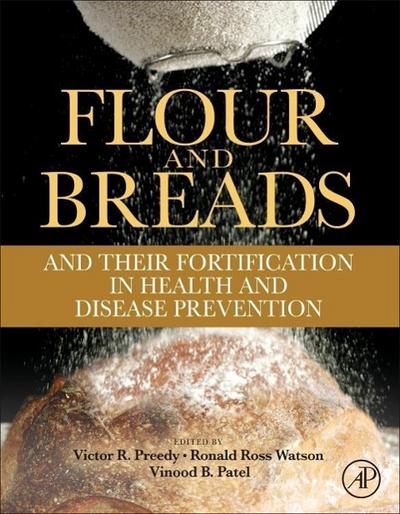 Flour and Breads and their Fortification in Health and Disease Prevention

Preedy, Victor R.Dr. Preedy is a senior member of King's College London and Director of the Genomics Centre and a member of the Faculty of Life Sciences and Medicine. Professor Preedy has longstanding academic interests in substance misuse especially in relation to health and well-being. In his career Professor Preedy was Reader at the Addictive Behaviour Centre at The University of Roehampton, and also Reader at the School of Pharmacy (now part of University College London; UCL). Professor Preedy is an extremely experienced book editor, having edited influential works including but not limited to The Handbook of Alcohol Related Pathology, The Neuropathology of Drug Addictions and Substance Misuse, The Handbook of Cannabis and Related Pathologies, The Neuroscience of Cocaine, and upcoming titles The Neuroscience of Alcohol, The Neuroscience of Nicotine, and more (all Elsevier).

Watson, Ronald Ross
Ronald Ross Watson, PhD, is Professor of Health Promotion Sciences at the University of Arizona, Mel and Enid Zuckerman College of Public Health. Dr. Watson began his research in public health at the Harvard School of Public Health as a Fellow in 1971 doing field work on vaccines in Saudi Arabia. He has done clinical studies in Colombia, Iran, Egypt, Saudi Arabia and the United States which provides a broad international view of public health. He has served in the military reserve hospital for 17 years with extensive training in medical responses to disasters as the chief biochemistry officer of a general hospital, retiring as a Lt. Colonel. He is a distinguished member of several national and international nutrition, immunology, and cancer societies. Dr. Watson's career has involved studying many lifestyle aspects for their uses in health promotion. He has edited over 100 biomedical reference books and 450 papers and chapters. His teaching and research focuses on alcohol, tobacco, and drugs of abuse in heart function and disease in mouse models.

Patel, Vinood B.
Dr. Patel is a Reader at the University of Westminster. After completing his PhD at King's College London, he continued his research experience by undertaking his post-doctoral studies in the laboratory of Professor Cunningham in the Department of Biochemistry at the Wake Forest University School of Medicine, (Winston-Salem, NC, USA). This extensive project involved investigating mechanisms of hepatic mitochondrial ribosome dysfunction in alcoholic liver disease (ALD) using biophysical and proteomic techniques. These studies have led to new avenues in determining the pathology of ALD. His teaching areas at both post-graduate and undergraduate levels include clinical biochemistry, investigative pathology and laboratory investigation.
Bread and flour-based foods are an important part of the diet for millions of people worldwide. Their complex nature provides energy, protein, minerals and many other macro- and micronutrients. However, consideration must be taken of three major aspects related to flour and bread. The first is that not all cultures consume bread made from wheat flour. There are literally dozens of flour types, each with their distinctive heritage, cultural roles and nutritive contents. Second, not all flours are used to make leavened bread in the traditional (i.e., Western) loaf form. There are many different ways that flours are used in the production of staple foods. Third, flour and breads provide a suitable means for fortification: either to add components that are removed in the milling and purification process or to add components that will increase palatability or promote health and reduce disease per se. Flour and Breads and their Fortification in Health and Disease Prevention provides a single-volume reference to the healthful benefits of a variety of flours and flour products, and guides the reader in identifying options and opportunities for improving health through flour and fortified flour products.