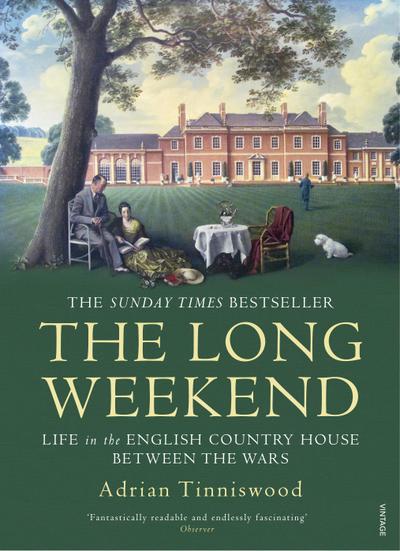 Tinniswood, AdrianAdrian Tinniswood OBE FSA is the author of fifteen books on social and architectural history, including Behind the Throne: A Domestic History of the Royal Household; The Long Weekend: Life in the English Country House Between the Wars, a New York Timesand Sunday Times bestseller; His Invention So Fertile: A Life of Christopher Wren and The Verneys: a True Story of Love, War and Madness in Seventeenth-Century England, which was shortlisted for the BBC/Samuel Johnson Prize. He has worked with a number of heritage organisations including the Heritage Lottery Fund and the National Trust, and is currently Senior Research Fellow in History at the University of Buckingham and Visiting Fellow in Heritage and History at Bath Spa University.

There is nothing quite as beautiful as an English country house in summer. And there has never been a summer quite like that Indian summer between the two world wars, a period of gentle decline in which the sun set slowly on the British Empire and the shadows lengthened on the lawns of a thousand stately homes.

Real life in the country house during the 1920s and 1930s was not always so sunny. By turns opulent and ordinary, noble and vicious, its shadows were darker. In The Long Weekend, Adrian Tinniswood uncovers the truth about a world half-forgotten, draped in myth and hidden behind stiff upper lips and film-star smiles.

Drawing on hundreds of memoirs, on unpublished letters and diaries, on the eye-witness testimonies of belted earls and unhappy heiresses and bullying butlers, The Long Weekend gives a voice to the people who inhabited this world and shows how the image of the country house was carefully protected by its occupants above and below stairs, and how the reality was so much more interesting than the dream.

The Sunday Times bestseller - a beautifully illustrated, evocative history of the English country house in the 20s and 30s