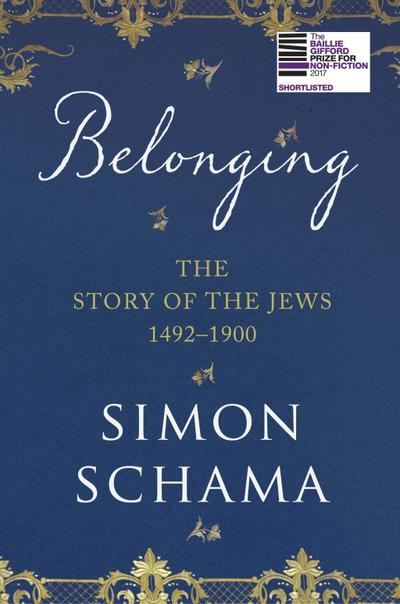 Simon Schama is University Professor of Art History and History at Columbia University. His award-winning books, translated into fifteen languages, include Citizens, Landscape and Memory, Rembrandt's Eyes, A History of Britain, The Power of Art, Rough Crossings, The American Future, The Face of Britain and The Story of the Jews: Finding the Words (1000 BCE - 1492).

His art columns for the New Yorker won the National Magazine Award for criticism and his journalism has appeared regularly in the Guardian and the Financial Times where he is Contributing Editor. He has written and presented more than fifty films for the BBC on subjects as diverse as Tolstoy, American politics, and The Story of the Jews and is co-presenter of a new landmark series on the history of world art, Civilisations.

A passionate history of Judaism; a world unfolding across many continents and five centuries by one of our greatest and internationally bestselling historians.

Belonging is a magnificent cultural history abundantly alive with energy, character and colour. From the Jews' expulsion from Spain in 1492 it tells the stories not just of rabbis and philosophers but of a poetess in the ghetto of Venice; a boxer in Georgian England; a general in Ming China; an opera composer in nineteenth-century Germany. The story unfolds in Kerala and Mantua, the starlit hills of Galilee, the rivers of Colombia, the kitchens of Istanbul, the taverns of Ukraine and the mining camps of California. It sails in caravels, rides the stage coaches and the railways; trudges the dawn streets of London, hobbles along with the remnant of Napoleon's ruined army.

The Jewish story is a history that is about, and for, all of us. And in our own time of anxious arrivals and enforced departures, the Jews' search for a home is more startlingly resonant than ever.

A passionate history of a world unfolding across many continents and five centuries by one of our greatest and internationally bestselling historians.