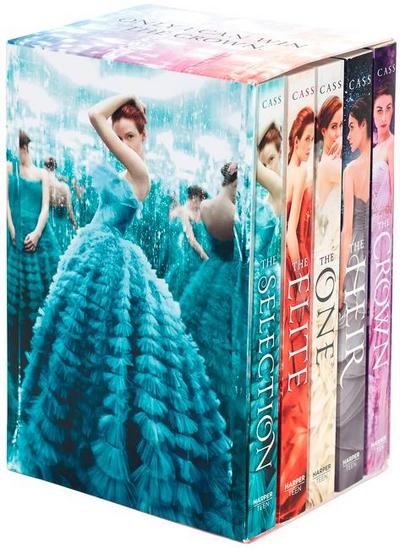 Kiera Cass is the #1 New York Times bestselling author of the Selection series and The Siren. She is a graduate of Radford University and currently lives in Christiansburg, Virginia, with her family. You can learn more about Kiera's books, videos, and love of cake online at kieracass.com.
All five novels in Kiera Cass's #1 New York Times bestselling Selection series-now available in one beautiful box set

For thirty-five girls, the Selection is the chance of a lifetime. The chance to live in a palace and compete for the heart of gorgeous Prince Maxon. But for America Singer, being Selected is a nightmare. It means turning her back on her secret love with Aspen, who is a caste below her, and leaving her home to enter a fierce competition for a crown she doesn't want.

Then America meets Prince Maxon. Gradually, she starts to question all the plans she's made for herself-and realizes that the life she's always dreamed of may not compare to a future she never imagined.

In The Heir and The Crown, Princess Eadlyn becomes the first ever princess to hold a Selection of her own-but she doesn't believe that any of her thirty-five suitors will capture her heart...

This gorgeous box set includes all five books in this #1 New York Times bestselling series, which has sold millions of copies and captured the hearts of readers around the world.