ISIS, The State of Terror 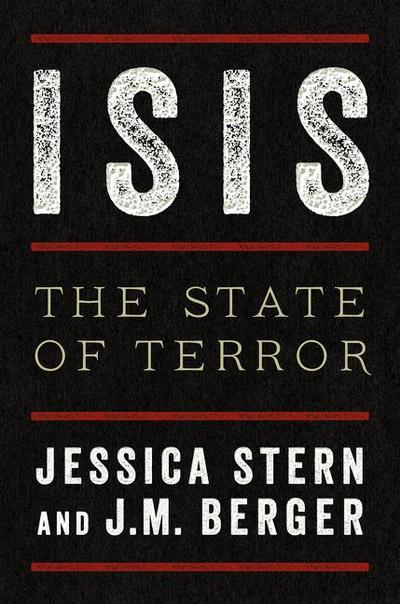 Jessica Stern is a research professor at Boston University's Pardee School of Global Studies and a Fellow at the FXB Center for Health and Human Rights at Harvard's School of Public Health. She served on the Clinton administration's National Security Council Staff. She is the author of Denial: A Memoir of Terror; Terror in the Name of God: Why Religious Militants Kill (a New York Times Notable Book of the Year); and The Ultimate Terrorists.
J. M. Berger is a nonresident fellow with the Brookings Institution and the author of Jihad Joe: Americans Who Go to War in the Name of Islam, a critically acclaimed history of the American jihadist movement. He is a regular contributor to Foreign Policy magazine and his website, Intelwire.com, has published thousands of declassified documents on the September 11 attacks and the Oklahoma City bombing.
The Islamic State, known as ISIS, exploded into the public eye in 2014 with startling speed and shocking brutality. It has captured the imagination of the global jihadist movement, attracting recruits in unprecedented numbers and wreaking bloody destruction with a sadistic glee that has alienated even the hardcore terrorists of its parent organization, al Qaeda.

Jessica Stern and J.M. Berger, two of America's leading experts on terrorism, dissect the new model for violent extremism that ISIS has leveraged into an empire of death in Iraq and Syria, and an international network that is rapidly expanding in the Middle East, North Africa and around the world.

ISIS: The State of Terror traces the ideological innovations that the group deploys to recruit unprecedented numbers of Westerners, the composition of its infamous snuff videos, and the technological tools it exploits on social media to broadcast its atrocities, and its recruiting pitch to the world, including its success at attracting thousands of Western adherents. The authors examine ISIS's predatory abuse of women and children and its use of horror to manipulate world leaders and its own adherents as it builds its twisted society. The authors offer a much-needed perspective on how world leaders should prioritize and respond to ISIS's deliberate and insidious provocations.
Drawing on their unusual access to intelligence sources, law enforcement, and groundbreaking research, two of America's leading experts on violent extremism and terrorism explain the genesis, evolution, and implications of today's most barbaric jihadist army, Islamic State-and how we can fight it.