Brookmeyer, B: Celebration Suite - I. Jig 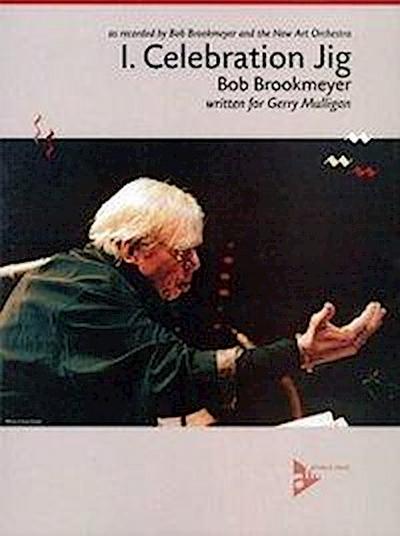 Celebration, a 4-movement suite, was written for and premiered by Gerry Mulligan at the Schleswig-Holstein Musik Festival in Lübeck, Germany in 1994. Recorded by Bob Brookmeyer and the New Art Orchestra on New Works (Challenge CHR 70066), featuring Scott Robinson, baritone sax. "The good will and beautiful playing of the musicians can not be described in words... just music. They have my eternal gratitude for making my life and music shine." Bob Brookmeyer Bob Brookmeyer (b. 1929) began writing music at age 14 and also began playing the valve trombone, arriving in NY in 1952. After joining Stan Getz in 1953, he replaced Chet Baker in the Gerry Mulligan Quartet, remaining with Mulligan for nine years, writing much of the music for the Concert Jazz Band. With Thad Jones-Mel Lewis, he wrote ABC Blues, Willow Weep For Me and St. Louis Blues, all seminal additions to the big band literature. After returning from California in 1978, he became Musical Director of the Mel Lewis Jazz Orchestra and wrote some of the finest music for that band including American Express, Ding Dong Ding, First Love Song, Hello and Goodbye, and Skylark. In the 1980s he wrote for both Jazz and Classical Orchestras and in 1994 formed the New Art Orchestra, an 18-piece ensemble of mainly European musicians. They have recorded two CDs for the Challenge label and commenced touring in 2001. A book on Composition is in the works and a DVD on Band Teaching is also planned. During the past decade, Brookmeyer has composed a diverse collection of jazz material, chamber music, and large orchestral works.Schwierigkeitsgrad: 5